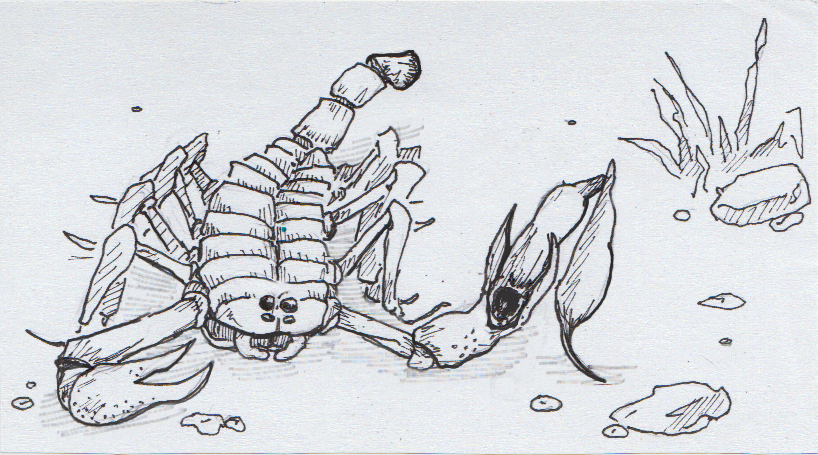 Choosing to Die (Horribly) Another Day

Many lizards can detach their tails as a way to escape predators, hoping to leave their appendage behind and make their escape. But what about if you couldn’t grow that appendage back? Would the escape still be worth it?

Some South American scorpions in the Ananteris genus seem to willing to take that risk, even though it will eventually cost them their lives. When threatened, these scorpions will voluntarily amputate their tails around the 2nd or 3rd segment. If they then escape as intended, they’ll be alive but be left with a short stump to hunt and defend themselves with. They’ll try, attempting to strike with what used to be their stinger, but in the end they’ll only be able to eat what they can handle with their claws.

The reduced diet is only part of the problem though. The other concern, the one that starts the final countdown on their lives, is at the other end of the digestive spectrum.

It turns out that the scorpions’ anus is located in the detached tail segments. After the tail is separated, the stump heals shut, leaving no way for waste to leave the body. Over time, feces builds up in the scorpion’s body, until it proves to be fatally toxic or the carapace bursts open. In some cases you can even see the build-up under the scorpions exoskeleton.

So why risk such a…revolting and unavoidable death? Is there a critical bucket list to get to in the months between amputation and dying in your own filth? If you’re a male scorpion, a few more months may mean many more chances to reproduce. As such, males are much more likely to attempt this maneuver than females. Similarly, younger scorpions, who have more of their possible mating life ahead of them, are also less likely to throw in their stinger when in danger.

Source: How the Scorpion Lost Its Tail (And Its Anus) by Ed Yong, Not Exactly Rocket Science