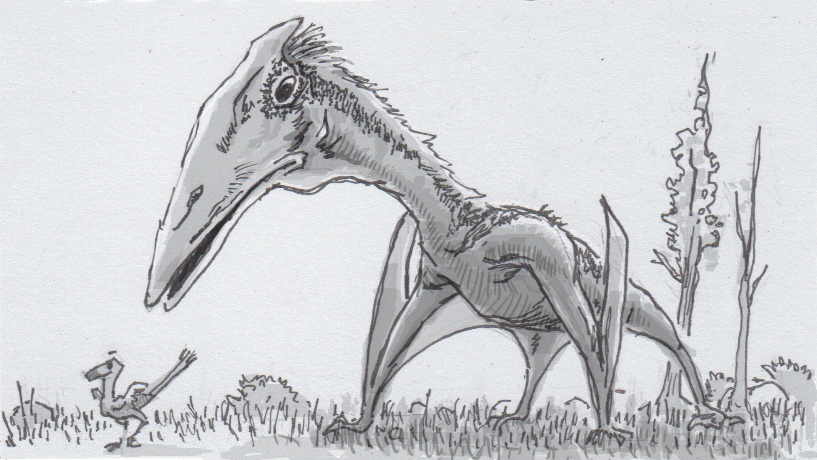 The circumstances that made a pterosaur prehistoric Transylvania’s top predator

Species isolated on islands can get a bit weird. By being separated from outside food sources or predators that once shaped their evolution, some animals shrink, while others grow huge in what’s known as island dwarfism and gigantism, respectively. In either scenario, the role an animal plays in their local ecosystem is likely to change, which can lead to strange scenarios like tiny elephants being attacked by giant swans. In late Cretaceous Romania, it seems to have led to enormous, burly pterosaurs that ruled their local food chain, preying on just about anything up to the size of a modern horse.

Hatzegopteryx thambema was a massive pterosaur species, related to another flying giant of the Cretaceous, Quetzalcoatlus. Both animals were huge with close wingspans hovering around 35-feet across, standing close to the height of a modern giraffe when walking. But where Quetzalcoatlus could be described as tall and thin, Hatzegopteryx was distinctly thick and robust, especially for a pterosaur. Hatzegopteryx bones were hollow and full of air sacs like other pterosaurs and birds, making them appropriate for flight, but they had thicker outer layers and an unusual amount of spongy tissue inside. Rather than emphasizing efficiency for flight, these adaptations suggest a focus on strength and durability.

No real competition for top carnivore

The neck vertebrae were actually so robust that they were initially mistaken for those of a predatory theropod. However, the theropods in what is now Transylvania didn’t grow taller than a human’s thighs, which meant that there was a bit of an opening in the local ecology for an apex predator. Paleontologists suspect that Hatzegopteryx’s specializations helped it fill that role. In addition to the thicker, shorter neck, the giant pterosaurs also had notably large jaws, growing up to 19 inches wide with a special groove at the joint to allow for a particularly wide gape. This was all packaged in a head nearly ten feet long showing ample points of muscle attachment. Hatzegopteryx probably lacked the bite force of other big-mouthed predators of the time, but it was more than capable of preying on just about all the smaller denizens of its island home.

With a flying predator like this, island life probably wasn’t terribly relaxing.