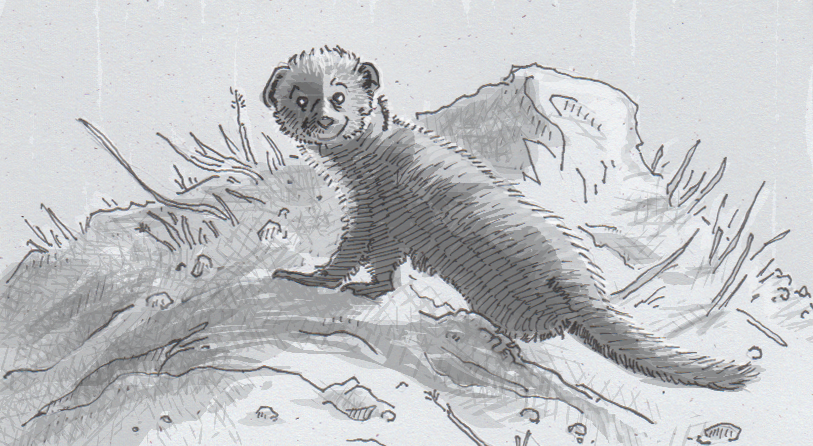 Vigilance isn’t easy. For bite-sized animals especially, a lot of focus is needed to catch a hint of a predator approaching before it’s too late. Just about every sense an animal has can be employed to watch, listen, smell and feel for an incoming attack, and many creatures even team up in flocks and herds to add some redundancy to their defenses. Unfortunately, it seems that a disruption to an animal’s sensory environment can make concentrating very difficult, which explains why cars can cause more mongooses to be gobbled up.

The South African dwarf mongoose (Helogale parvula) is Africa’s tiniest vertebrate carnivore, which means that while they eat meat, they still need to live their life a lot like prey. To avoid being eaten by everything from jackals to hawks to larger mongoose species, they spend a lot of their time surveying the area near their burrow, checking to see if it’s safe to go out to look for food. Working in shifts, dwarf mongooses try to double check every new sound and smell that they detect near their home to see if it’s a sign of a predator. Unfortunately, their diligence can only go so far, and can apparently be overwhelmed with too much stimuli.

Investigating the presence of poop

As an experiment about the limits of mongoose concentration, researchers placed some poop from other species near the mongooses’ burrow, then played recordings of different sounds from a realistic distance. If the sounds were natural, ambient noise from the local environment like birds and grass swaying in the breeze, the mongooses reacted to predator poop quite responsibly. They would creep up, smell the poop, mark the area with their own scent, and possibly return to the safety of the burrow, keeping watch near the entrance. If the poop was from an herbivore, they were a bit more relaxed, skipping the scent-marking and spent less time by the burrow’s entrance, showing that it was assessed to be a lesser threat than the presence of a predator.

If the audio was of traffic, the mongooses seemed to lower their guard. They would still investigate the poop, but rather than react more carefully to predator’s poop, they would treat everything like a less-threatening herbivore. Scent-marking was skipped, and less time was spent at the burrow, as if a jackal in the area was suddenly no big deal.

Too loud to smell

Researchers believe that this change in behavior isn’t that the mongooses believe the noisy cars make them safer, but that the noise is making it hard for them to focus on what’s in front of them. Even though their sense of smell wasn’t being bombarded, they may have been experiencing ‘cross-modal’ confusion, where one sense is so overwhelmed it interferes with other sensory input as well. You can imagine how reading a legal document might be hard in the middle of a loud concert, where the sound and activity would make it hard to pay attention to visual stimuli, even if they weren’t directly conflicting with each other. For the mongooses, this lapse in vigilance can be a life-or-death mistake, and so researchers are advocating that people try engineer quieter forms of transportation like better sound walls or quieter engines.

Source: Can Noise Pollution Affect the Way Mongooses Sniff Out Their Enemies? by Jason Bittel, on Earth