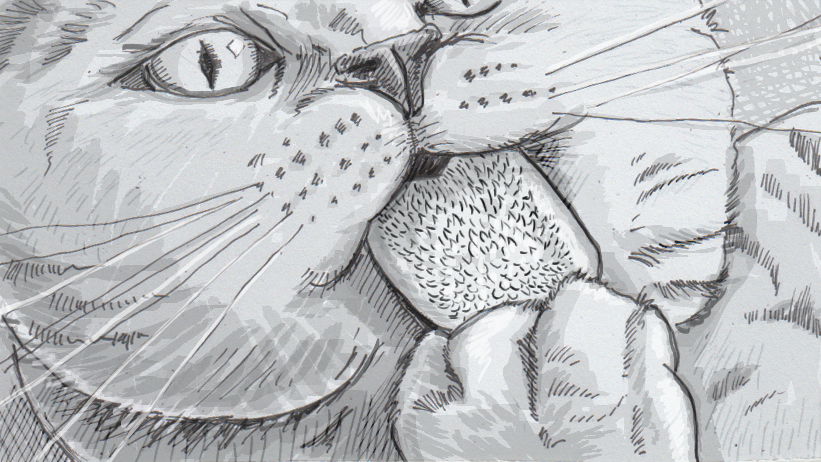 Engineers at Georgia Institute of Technology may have found a conclusive reason that my second grader needs a pet cat (beyond really really wanting one.) Assuming the cat could be trained (…uh,) their tongues may be my daughter’s best option for dealing with the snarls in her hair. While the texture of cat tongues are often described as simply as rough like “sandpaper,” it turns out that they’re significantly more sophisticated than even the fanciest detangling hairbrush.

Better than our brushes

Cat tongues are effective cleaning devices because they’re actually covered in what could be thought of as tiny claws. Structures called papillae cover the top of the tongue, each pointed back towards the cat’s throat in a slightly-hooked curve shape. To give these papillae some strength, each one is made of keratin, which is the same substance that makes up your fingernails or a cat’s claws. There’s some flexibility where each hook connects to the tongue, but overall they can provide the feeling of grit we compare to sandpaper when we feel it on our skin.

When a cat licks itself, the shape and movement of the papillae go to work. They can hook into tangled hair, but the curved shape doesn’t bend and let go like most of our hairbrushes. Instead, the tangled hair is teased apart, even if it requires a bit of lateral wiggling from the tongue spine along the way. The other advantage of the hooked shape is that captured hair can easily be removed, sliding out in a single direction with little effort (even if that direction is down the cat’s throat.) The jury is still out on how much the cat’s saliva helps or hurts the process, but the structural design of the spines alone beat just about any brush you can buy at the store today.

As scientists investigate cat tongues further for possible applications like soft-bodied robots or yes, better hairbrushes, the cats are obviously benefiting from these specializations already. Not every furry mammal needs a tongue like this, but they are a crucial adaptation for house cats (and probably big cats as well.) As all of the above indicates, cat tongues are quite effective at keeping cats well groomed, keeping them free of debris and brambles. This cleanliness helps the cats sneak up on prey, since they’re less likely to get snagged on the surrounding terrain or carry an unusual odor that might give away the cat’s presence. Grooming also helps distribute a layer of waterproofing oil across the cats’ fur, which you probably help with when you stroke a friendly feline in your lap.

Finally, grooming is used as a social bonding activity between cats, particularly family members. This is similar to the shared grooming rituals of many primates, although the tie-in to hunting means that cats will complete the task alone if need be. In strong contrast to my second grader, the average house cat may spend half its waking hours tending to its hair.

My second grader said: I don’t think we could train a cat to lick my hair.