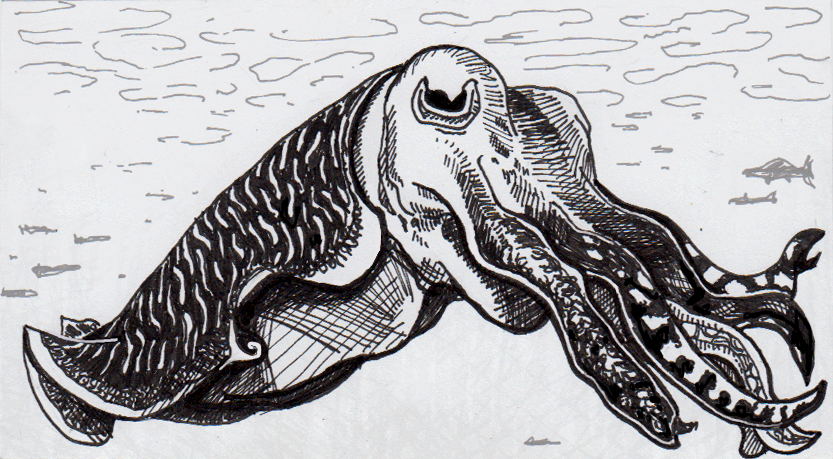 Clique of cuttlefish caught cruising together

So cuttlefish aren’t actually known to move in squads, swarms or pods. In fact, until very recently, they weren’t even seen moving in schools, instead being observed as loners like their cousins, the octopus.

In August of 2013, batches of smaller broadclub cuttlefish were seen moving in what appeared to be a coordinated group. The 2 – 9 members stayed at regular distances from each other while moving in the same direction, arranged from larger to smaller individuals. Their postures indicated that they were on the hunt, with arm pairs raised and colored as lures while their tentacles were ready to strike. The synchronized movements possibly magnified the effect of the lures, catching the attention of more prey than a single cuttlefish would have done on their own.

What wasn’t seen was the usual dynamics of groups of cuttlefish, generally only seeing around mating. In those cases, male cuttlefish use their color-changing abilities to give themselves threatening zebra-stripe patterns in order to scare off other suitors. This can be followed by cuttle-combat when the stripe aren’t sufficient.

Now that we know the broadclub cuttlefish have broken this mold and found a way to work together, an etymological opportunity has presented itself. Will groups of cuttlefish be known as “schools,” (like squids) or will we end up with something more unique? I vote for “clique, ” but there are lots of good ideas popping up in the comments at Deep Sea News.

My kindergartner asked: How big are broadclub cuttlefish? Their mantles, the body without the tentacles, around around a foot and a half on adults. She then suggested we call their groups “cuttleswimmy groups.”

Source: So what do you call a group of cuttlefish? by Dr. M, Deep Sea News