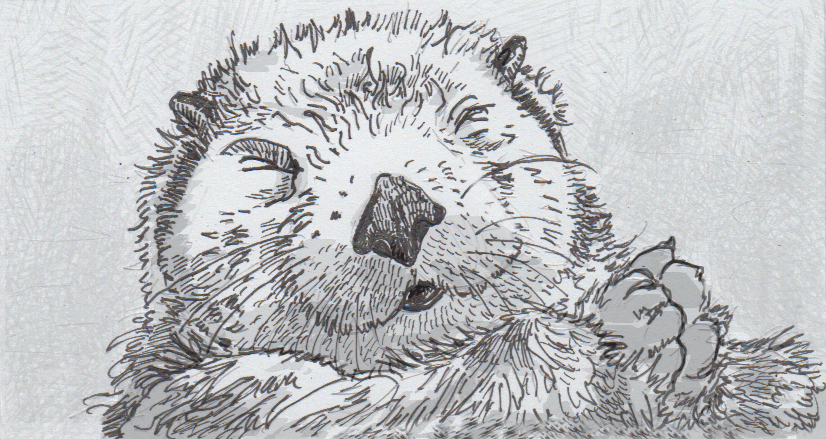 When we think of predators with powerful bites, like a crocodile or even a tyrannosaurus, we don’t usually think of how cute they are. To maximize bite force, a beefy jaw can actually push an animal’s proportions to nearly baby-like sweetness, particularly if pleasantly fuzzy skin is thrown in as well. No animal demonstrates this concept more than a sea otter, who’s large cheeks remind us of an adorable baby, even though they evolved for shell-shattering strength.

Not all otters have as pinchable-cheeks as Enhydra lutris. River otters, while not bad looking, have jaws designed to let them quickly snatch fish from the water. Their longer snouts evolved for reach, and since they were targeting softer prey, bite force wasn’t such a priority. This is in contrast with the beloved sea otter, who’s face is dominated by a stubby, broad face, loaded with thick, strong jaws. Since they dine on slower prey, like molluscs and urchins, their skulls evolved to give them a powerful bite instead of a fast one. The relationship between bone structure and diet holds true across a spectrum of otter species,  with thicker, wider jaws matching up with tougher dinners across the board.

These wide jaws also provide the benefit of making these chompers look like babies. The theory of kinderschema posits that things with the facial proportions of human babies remind us of our own, generally helpless offspring. The large foreheads, small noses and big cheeks are thereby considered cute by most people, despite their original evolutionary purpose. The discrepancies from a real human are of course important. While getting chomped by a human infant is of course uncomfortable, cheeks that are actually stuffed with fat instead of shell-crunching bone and muscle make a huge difference. However, there might still be some magic to an otter’s appearance, since weasels have an even stronger relative bite force than sea otters, but not many of us are running out to get a plush Mustela altaica for our kids.