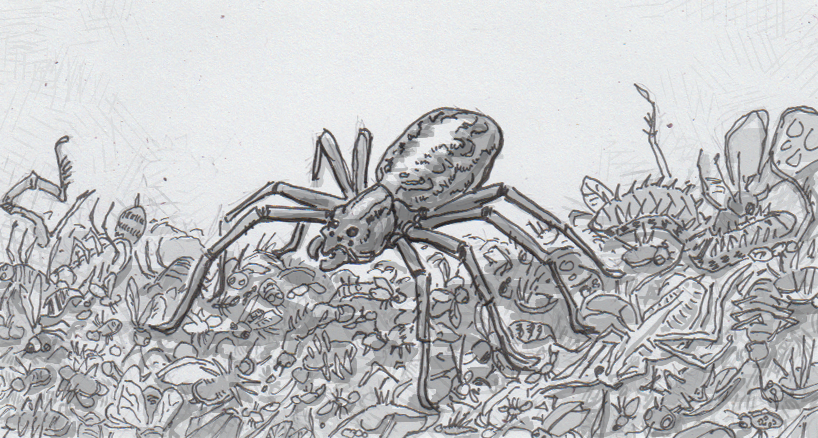 While humans have been reshaping the world to rather devastating effect, pound for pound we’re having a hard time keeping up with bugs. Surveys of American homes had no problem coming with over 100 species of arthropods per house. Out of all the mites, isopods, flies, beetles and wasps, one of the most important groups was the spiders, which accounted for about 19% of the surveyed species (not individuals). Those spiders are a significant part of why we’re not aware of all these other critters, because spiders are eating a lot of them.

In a meta analysis that moved outside the American home, researchers have tried to come up with a world-wide estimate of just how much of an impact spider diets make on the world. Starting with data from 65 other studies, the team calculated that their are around 27.6 million tons of spiders on the planet. Some obviously turn up in our houses, but the vast majority are living in forests, grasslands and shrublands. As infested as the above numbers may make your house sound, the real bug buffet is still outdoors.

To figure out how much that mass of spiders is eating, two different methods were employed. The first was sort of like a market estimate of spider consumption, figuring out how much mass a spider needs to eat, and basically scaling that up with adjustments for population density in different ecosystems. For contrast, the researchers also looked at more direct observations of what spiders capture and eat in the field, then scaling that for the number of spiders expected to be in the average square meter of that environment.

It’s actually hard to imagine what even one million tons of spiders looks like, since even if every spider weighed as much as the record-holding goliath birdeater (Theraphosa blondi) at 6.3 ounces, you’d still be talking about at least 507.9 million spiders. That group would then be responsible for eating close to 15 million tons of that prey a year. Even though the vast majority of this activity is happening outdoors, it’s still a lot of free pest control as far as humans are concerned.

If that’s not exactly comforting, try this: while spiders are eating tons of other bugs from beetles to mosquitoes, they’re also important sources of food for other creatures. Some aren’t so warm and fuzzy, like parasites that specialize in consuming spiders, but three to five thousand bird species are also part of the spider food-web, putting all that mass to even more use.