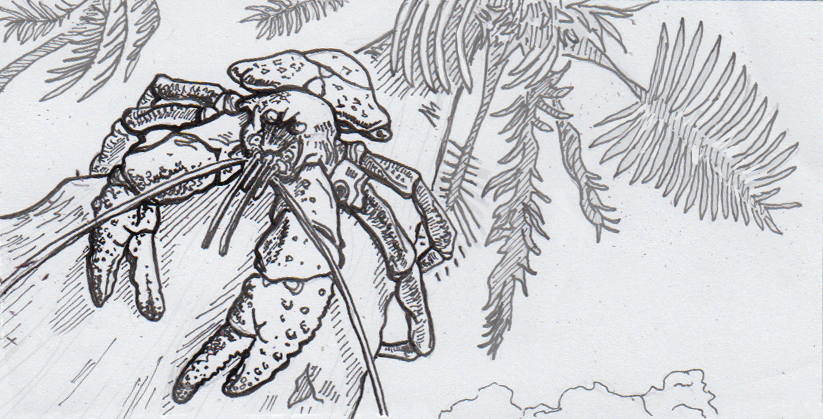 As an arthropod like a crab or a spider grows larger, it has to molt and discard its otherwise limiting exoskeleton. In the case of hermit crabs, that growth often requires finding and moving into a larger snail shell to protect an otherwise soft abdomen. If the hermit crab happens to be getting larger than the local gastropod population, a hunk of coconut shell might do the trick. If the hermit crab insists on growing larger still, things are going to get complicated, requiring everything from a burrow to cannibalism to giant claws. But for coconut crabs, it seems to be worth the trouble.

Coconut crabs (Birgus latro) are the world’s biggest terrestrial arthropods, managing to grow larger than any temporary shell can handle. Living for 50 to 100 years on islands around Indonesia and the South Pacific, the ten-limbed crabs can grow three feet across and weighing around nine pounds. Once they mature past their larval stage, adult crabs spend their whole lives on land, having evolved a set of specializations to make living on land possible, even if it means they’ll basically drown if they go back in the water for too long.

A big influence on their lives is their strange, hybrid respiration. They don’t have a full set of lungs to take in fresh air, but they don’t have the same gills as their aquatic relatives either. Along the backside of their bodies, they carry an organ called a branchiostegal lung, which functions somewhere in between lungs and gills. It wicks oxygen out of the air like gills, but not if it dries out too much. As such, the lung is tucked into the animal’s carapace, where it can be moistened by the crab’s smallest set of legs on a regular basis. Managing sun exposure is also important, and the crabs will often hide in their burrows during the day to avoid drying out, locking in moisture by making a “door” with their front claws across the entrance.

This climate control measure also helps with the crabs’ security. Coconut crabs will readily practice cannibalism, and so blocking the entrance to a burrow helps keep unwanted visitors out of one’s home, which is especially important in the middle of a molt. It can take days or weeks for a new exoskeleton to fully harden, and so the crabs will hide in their homes to avoid unwanted confrontations. In the mean time, they can feed on their shed shell, reclaiming nutrients that would otherwise be discarded.

These defensive measures may have influenced the crabs’ diet, and moniker, as well. Defending against home invasion has been suggested to be a pressure that would have pushed the crabs to evolve larger and larger claws. Along the way, those claws opened up new menu options as well, specifically in the form of opening coconuts. While the crabs will basically eat anything they can get a hold of, from fruit to carrion to rats and reportedly even kittens, they seem to thrive when coconuts are available.

Coconut crabs have been known to climb the coconut palms where they live, but it’s unclear if they’re trying to shake coconuts loose, or just taking shelter in the shade. Once the coconuts are on the ground though, the crab will carefully remove the outer husk before looking for the point where the fruit was attached to the tree. It will then strike that weak point until it cracks, then use it’s enormously powerful claws to rip the coconut apart and eat its hard-earned meal. Capable of 1000 to 1500 newtons of force, these claws are a pretty good reason for the crabs to give each other plenty of space outside of mating season.

For the most part, the crabs actually have no natural predators on their native islands. However, like many animals around the world, humans seem immune to such nuances, and have often devoured the large crabs with gusto. Our dogs and pigs further encroach on crab territory, and at this point we don’t really know how coconut crabs are doing as a species. They might be feeling some pressure to branch out though, having turned up in Hawaii in 2014. It’s thought that larvae, which are born in the ocean, may have somehow drifted to Hawaii, but there is great concern if the crabs get a foothold there as an invasive species. Their versatile diet could make them a threat to native animals, especially if there aren’t enough coconuts to go around.