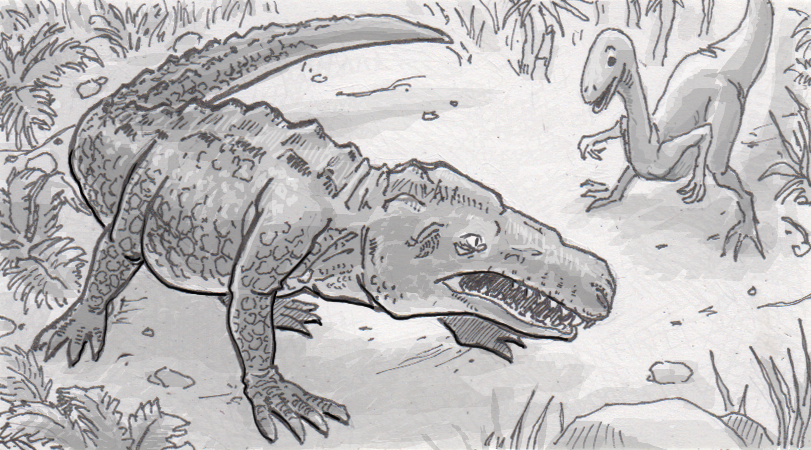 While the name may suggest otherwise, the Age of Dinosaurs was not always ruled by actual dinosaurs. Some ecosystems were instead dominated by other lineages, with crocodilians most often giving dinosaurs a run for their money. As distantly related members of the archosaur family tree, these animals often adopted similar predatory strategies as the theropod dinosaurs we normally think of as apex predators. This kind of convergent evolution ended up producing some amazing species, such as the recently named Razanandrongobe sakalavae.

Once glance at R. sakalavae would make it clear that this reptile wasn’t a modern crocodile. While the basic shape of the body looked crocodilian, that body walked on upright legs, allowing considerable ground-clearance and mobility. Its snout was wide and robust, carrying six-inch serrated teeth. When these factors are combined with an overall size that may have reached over 40 feet long, it starts to make sense why R. sakalavae would be compared to other apex predators like Tyrannosaurus rex. All these pieces of anatomy set the creature up to tear flesh and break bones with impunity in its local ecosystem.

All these features beg the question of where R. sakalavae has been all this time? We don’t have any complete skeleton of this animal, with the few fragments that have been recovered coming from Madagascar. R. sakalavae was part of a crocodilian lineage called Notosuchia, and indeed R. sakalavae seems to be the oldest and largest member of that branch of the crocodilian family tree. However, Notosuchia is just as mysterious as this new reptile, as all known members appear after the start of the Jurassic period 174 million years ago. With no immediate way to trace how Notosuchia came to be, paleontologists refer to the sub-order as a ghost lineage, appearing in the fossil record without any clear ancestors to get them there.

R. sakalavae does help answer some of these questions. The large predator’s presence in what is now Madagascar adds to a hypothesis that Notosuchia  got its start in southern Gondwana, the super-continent that once included all of today’s continents in a single landmass. As exciting as a new giant, upright crocodilian with giant teeth may be, R. sakalavae’s real bigger importance may end up being that of a stepping stone towards uncovering its ancestors.

Source: Gigantic crocodile with T. rex teeth was a top land predator of the Jurassic in Madagascar, Phys.org