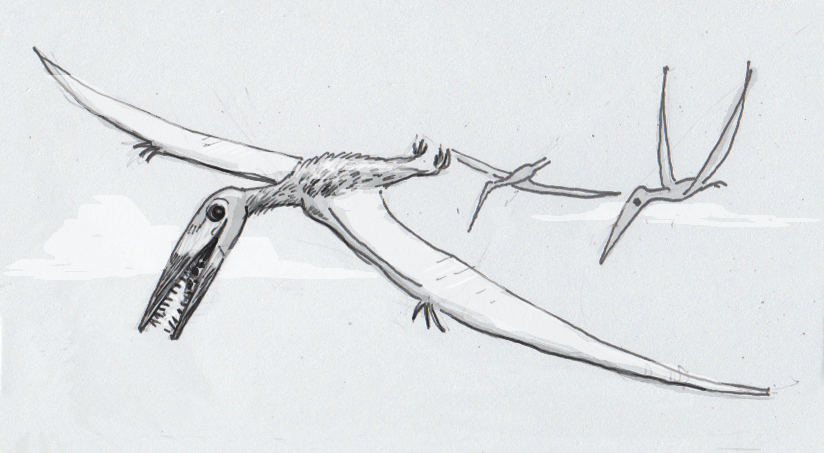 A pterosaur skull from around 150 million years ago was recently found in China, and represents a big turning point in the history of these extinct flying reptiles. While they lived alongside dinosaurs and early mammals from the start of the Mesozoic, pterosaurs somehow managed to avoid diversifying their diets for nearly 65 million years. For the longest time, all known species of pterosaur were a bit like fussy children, eating only their favorite fish and insects, no matter where they lived or what other resources were in the area. However, those narrow preferences finally began to broaden, with species like Liaodactylus primus leading the way.

Liaodactylus primus represents a sort of missing link in the story of pterosaur evolution. We know that pterosaurs later in the Cretaceous period, all the way up to their extinction 65 million years ago, were a much more diverse group than their predecessors. Across the swath of species we know of, a swath of dietary niches were covered, from fish to insects to anything small enough to eat. For L. primus, the key source of food was filter feeding on small crustaceans and plankton, similar to a modern flamingo eating brine shrimp today.

L. primus isn’t the most specialized filter feeder when compared to later species like the bristle-mouthed Pterodaustro, but it provides clues about how those species came to be. The five-inch skull of L. primus is around 50 percent jaw, packed with 152 long, thin teeth. These teeth don’t quite qualify as bristles, but they are considered to be a sort of transitional “comb dentition”, and would have been better suited to filter feeding than snatching insects out of the air. Overall, the tiny pterosaur had a wing span of just a few feet, but if it was well on it’s way to sifting food out of shallow waters, it wouldn’t have needed to invest in a big, muscular body.

As the oldest filter-feeding pterosaur we know of, L. primus helps us better understand the timeline of how these types of animals evolved. It doesn’t fully explain how pterosaurs came to diversify their diets in such a big way in the Cretaceous period, but it does show some critical steps from fish spearing teeth to thick, bristling teeth in that relatively short timespan.

Source: Liaodactylus primus and the Ecological Evolution of Pterodactyloidea by Ferwen, Letters from Gondwana