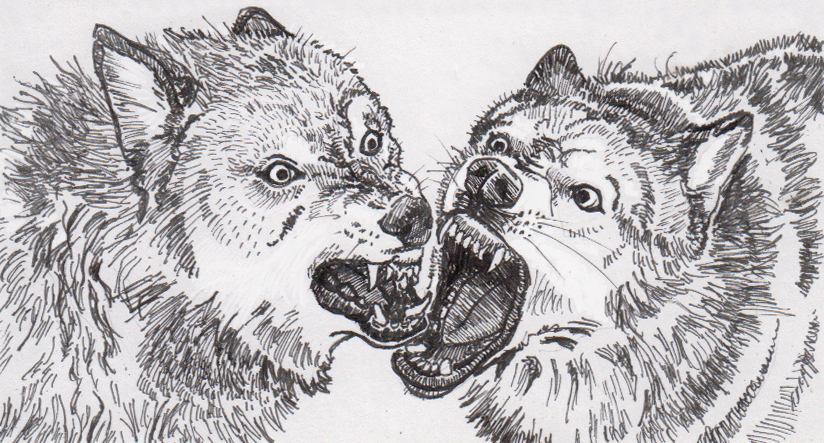 What’s the difference between cooperative and cooperating? It’s something that’s being examined in behavioral studies of canines, of all places, as researchers have found some clear differences in how wolves and domesticated dogs conduct themselves. A well-trained dog doesn’t contest your commands, and while that may feel like cooperation from your perspective, it apparently doesn’t mean your dog is really a team player. For that, you may have to look to the interactions of wolves, as soon as they stop biting and snarling at each other.

To test how cooperative wolves and dogs were with their peers, researchers gave them a test that would require a touch of synchronous team-work. Trays were set out beyond the animals’ reach, accessible only with ropes that could be used to pull the food closer. However, the catch is that pulling one rope at a time wouldn’t get the job done— to get to the food, two animals needed to pair up and pull at once. This test has been used with primates in the past, but it proved to be a significant challenge for the various pairs of canines.

By the numbers, wolves didn’t find the task easy, but they were much better at teaming up than dogs were. There was often a fair bit of snarling and posturing involved, similar to the behavior seen in the wild when wolves are dividing up a carcass for dinner, but pairs of wolves managed to pull together 100 times out of 416 attempts. Domestic dogs only obtained the food twice, largely because they never came together. While dogs would try pulling the rope by themselves, at no point did they ever start pulling at the same time.

Researchers believe that the gap in dogs’ performance is due to how these animals deal with social hierarchies. While wolves may nip and snarl at each other, a lower-status wolf can still approach and engage with a dominant member of the pack. What starts as a confrontation is the contact necessary to explore and discover how to cooperate. Domesticated dogs, on the other hand, don’t seem so flexible. Lower-status dogs never even approached more dominant group members, meaning they never gave themselves the chance figure out how to work together.

This suggests that while domestication has created dogs that can be very observant and capable of working with humans, we may have inadvertently reduced their inclination to work with each other. They seem to expect more of a fixed authority issuing commands, presumably in the form of a human, and thus are less comfortable with social friction among peers. This kind of dynamic wouldn’t feel much like cooperation between two humans, but that doesn’t mean we need to say that domestication rewired dogs’ brains around domination entirely. To see if dogs are just shy about being in proximity to more dominant group members, researchers are looking to modify the test to allow cooperation to be asynchronous. It may turn out that dogs would be happy to help, as long as they can take turns doing so, avoiding being within striking distance of a more dominant partner.

Source: Why wolves are better team players than dogs by Elizabeth Pennisi, Science