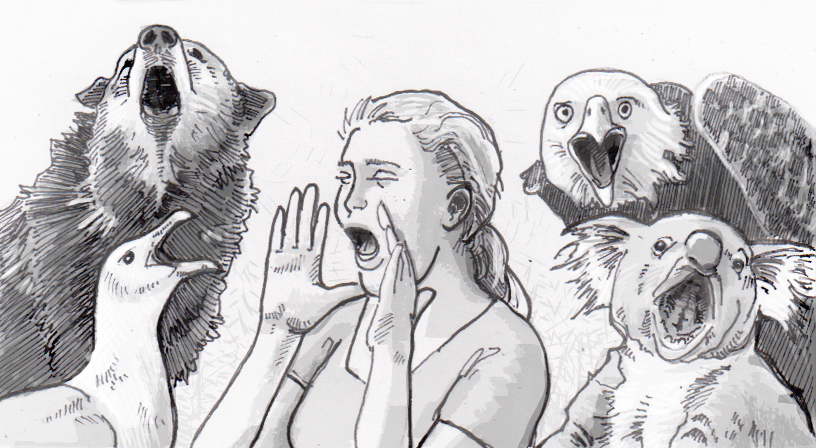 Despite their efforts to prove otherwise, my kids just aren’t that loud, relatively speaking. Sure, their shrieks seem like they could peal the paint of the walls sometimes, but as humans they just can’t generate coherent sound as well as most other birds and mammals. After studying the physics of many species’ bodies, researchers have figured out the three main factors that keep humans from being able to shout as loudly as you might expect for an animal our size.

The first limiting factor in human vocalizations is just how well we can push air with our mouths. Generating a specific sound requires pushing and shaping air from the lungs, through the throat and out our mouths. Each piece of anatomy that that air passes by may help vibrate it at specific frequencies to produce a desired note, but they also absorb energy.  This means that a significant amount of the initial power your lungs may try to provide is reabsorbed by your body before it has a chance to be broadcast to listeners’ ears.

Many animals make up for this side effect of being squishy by maximizing how much air they push out of their mouths. Opening a beak or maw just a bit wider increases the amount of air, and thus the volume of a vocalization, substantially. So while human tongues, lips and cheeks may help us speak, the average human mouth can only open to a two-inch diameter. Essentially, the anatomy that helps us shape our speech also gets in the way of outgoing air, forcing us to be a bit quieter.

As it turns out, we may not be picking the best sounds to say, either. If humans really wanted to speak more loudly, we’d do so at a more efficient pitch. Based on the shape of our vocal tract, we’d be louder if we shouted at around 6,860 Hz, although our ears are probably grateful that we don’t. Instead, an adult human usually speaks at around 300 Hz, giving up volume for something a bit more pleasant to listen to.

Finally, human posture also dampens our auditory output. Ideally, we would be able to use our anatomy as a sort of sound-reflective wall, or baffle, directing our voice in one direction as much as possible. Birds, for instance, can tuck their head back a bit making their body shape a big tube, pushing air from their lungs straight out of their mouths. For people, our upright posture and relatively inflexible neck doesn’t let us adopt a pose that would really optimize our lung capacity in this way.

Of course, in an age of ubiquitous cell phones, why should we worry? Most of us don’t plan on singing opera, and can just use technology to broadcast our voice around the world. However, there is an interest in knowing how far a human voice an intelligibly travel, particularly in search and rescue scenarios. If we know exactly how far a human can push coherent sound, it may help first responders know how close they need to be before they should expect a call for help. Either that, or we all need to learn to whistle a lot better.

My third-grader asked: What about whales? I thought blue whales had really deep voices.

Blue whales can make sounds that are so low we can’t hear them with our ears. Those low-frequency vibrations can then travel huge distances through the water, which is actually a bit better at transmitting sound than the air is. However, the whales aren’t expelling air to make any of these sounds, so the above “rules” about mouth sizes and optimal pitches don’t necessarily apply.

What about elephants? And… wait, do other animals use their noses to make sound?

Elephants may be the only animal that really need push air out their nose for vocalizations, although they also make sound with their mouths. Studies have found that both kinds of exhalations are pretty loud, although a lot elephant communication happens with low grumbles and grunts, many of which are at least partially transmitted through the ground instead of the air, making this a less direct comparison. In fact, elephants have specialized in that range of sounds so much that they don’t hear some of the higher-frequency vibrations that our ears can pick up. One of the big effects of their trunks isn’t to be louder, but to help make their overall vocal tract larger, making it easier to produce lower sounds.

Speaking of long anatomy, giraffes’ long necks apparently make it hard to push large amounts of air out of their mouths, leaving them a bit mute. On the other hand, a study of 1000 hours of giraffe recordings did discover that they can use their body, and presumably their neck, as a resonating chamber. While they’re not easy to hear, giraffes can make low-pitched set of humming noises, in addition to smaller, more obvious snorts from their noses.

Source: How animals holler by University of Utah, Phys.org