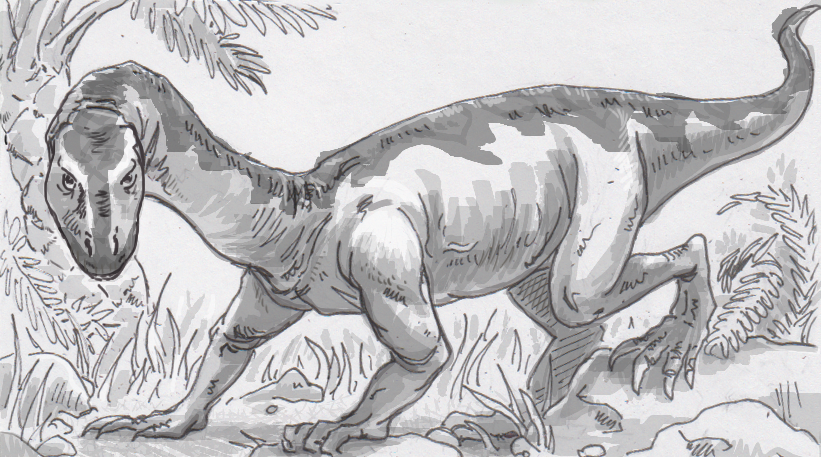 80 years ago, fossils from a ten-foot long reptile was found in Tanzania by F. Rex Parrington. The 245 million-year-old skeleton was incomplete though, lacking critical anatomy that would make it impossible to completely identify for decades. Many species are known only from incomplete skeletons, but in this case things were much trickier, but this long-necked quadruped shared many features with both crocodilians and dinosaurs in a weird blending of features. It seemed to be a transitional creatures between these two lineages, but until crucial bones were found, the reptile couldn’t be placed in the reptilian family tree, much less inform our understanding of how dinosaurs evolved in the first place. Fortunately, in 2015, these gaps were closed thanks to the discovery of the animal’s head. And ankles.

The ancient archosaur has been named Teleocrater rhadinus. It hard sharp, slightly curved teeth that it likely used to eat smaller prey available at the time, like early predecessor to mammals. Quite importantly, it walked on all four legs, which nudged it closer to the crocodilian side of the family tree, away from what paleontologists assumed was the precursor to the first dinosaurs, which were small and bipedal. The final discovery of T. rhadinus‘ ankle bones also showed a more complex structure, originally thought to be specialization that evolved after crocodilians split with avemetatarsalia, the creatures that would eventually yield pterosaurs and dinosaurs.

However, you can’t necessarily categorize an animal by a single ankle bone, which explains why Teleocrater is actually considered to be closer to dinosaurs than crocodiles. Despite the aforementioned features shared with crocodiles that are now thought to have been inherited from a common ancestor, other anatomy makes it oldest example of the split between crocodilians and dinosaurs. While not a dinosaur itself, Teleocrater had elongated vertebrae, a depression in the skull and distinctly dinosaur-like muscle attachment points on its legs. As a sort of “missing link,” Teleocrater shows a much more blended set of anatomy than paleontologists expected on this side of the family tree.

Filling in the family tree

Aside from answering questions about T. rhadinus, this complete skeleton will help paleontologists understand other animals they’ve found from the Triassic Period. Bipedal animals can now be understood to be more closely related to dinosaurs, as that trait must have evolved later than Teleocrater. Ankle joints that are simple, hinge-like affairs in dinosaurs and modern birds, are now known to be a specialization of dinosauria, with crocodiles simply retaining the more ancient, complex ankle structures. In the end, this small steps wouldn’t be enough to make dinosaurs the dominant creatures on Earth, that would require a mass extinction at the end of the Triassic, but it does help paint a picture of a more gentle series of changes that led dinosaurs down their bird-footed path in the first place.

Source: Before There Were Dinosaurs, There Was This Weird Crocodile-Looking Thing by Brian Switek, Smithsonian