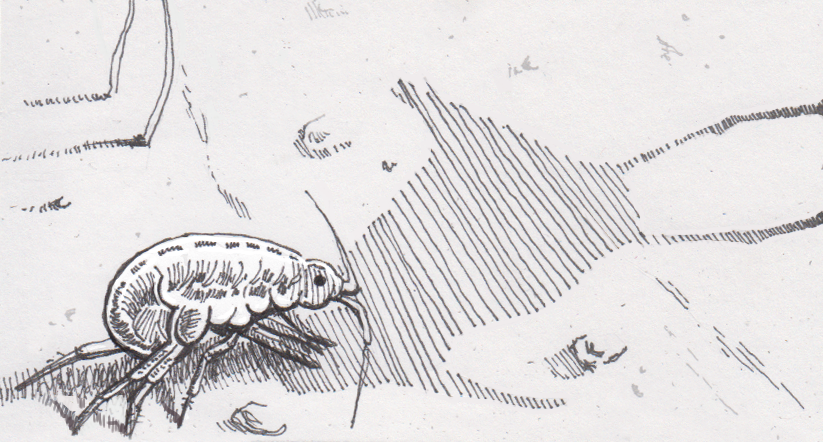 There’s probably no major cause for alarm, but scientists have been running experiments to create zombies. It’s not that they’re mad- the experiments are actually aimed more at ecological concerns with pollution rather than satisfying some kind of maniacal god complex. The experiments do prominently focus on mind-controlling parasites, but unlike they zombies of popular mythology, these creatures have no interest in eating your brains, because their real goal is to be eaten.

Making themselves into a meal

The zombies in question are actually salt-marsh amphipods called Orchestia grillus. They’re little crustaceans less than an inch long, looking a bit like a shrimp that’s been forced to crawl out of the sea. They normally scurry in the shelter of rotting debris along salt marshes, eating algae and other decaying leftovers in the area. Eating decaying organic material sounds kind of zombie-like, but no more so than your average earthworm. The real horror, at least for the amphipods, starts with the arrival of Levinseniella byrdi, a flatworm-like parasite.

Once the parasite has infected an amphipod, it takes control of it’s behavior, turning it from a spritely, hopping land-shrimp into a slow, mindless creature that barely responds to stimuli. It doesn’t march along cannibalizing it’s friends though, since its real goal is to be eaten by birds. So instead of scurrying to safety when caught in the open, zombified amphipods will wander out of cover, sitting still until a predator finds it. Just in case this mindlessness isn’t enough to get the crustacean eaten, L. byrdi takes the extra step of recoloring its host’s body. Instead of a subtle brown, infected amphipods turn bright orange, making them all the more apparent to passing sparrows, willets or sandpipers. Once eaten, L. byrdi can continue with the next stages of its life cycle, taking up residence in the bird’s intestines.

Scientists didn’t invent any of this relationship, but they are trying to figure out what makes it work. They’ve been adding nitrogen to specific plots in New England salt marshes, simulating the fertilizer-rich runoff that frequently flows downstream from farms. The concern isn’t for the undignified death of infected amphipods, but for the long-term effect of all this extra nitrogen. As suspected, the extra nutrients help more algae grow, providing more food for amphipods and thus, more food for birds that can then spread the parasites further. The nitrogen-rich areas had 13 times more parasites than areas with more natural nitrogen levels. We’re not necessarily going to run out of amphipods, but spikes in parasite populations may be a problem in larger numbers. These results may also provide a model for other parasites’ relationships with environmental pollutants, including those that don’t conveniently turn their hosts bright orange for a quick head-count.