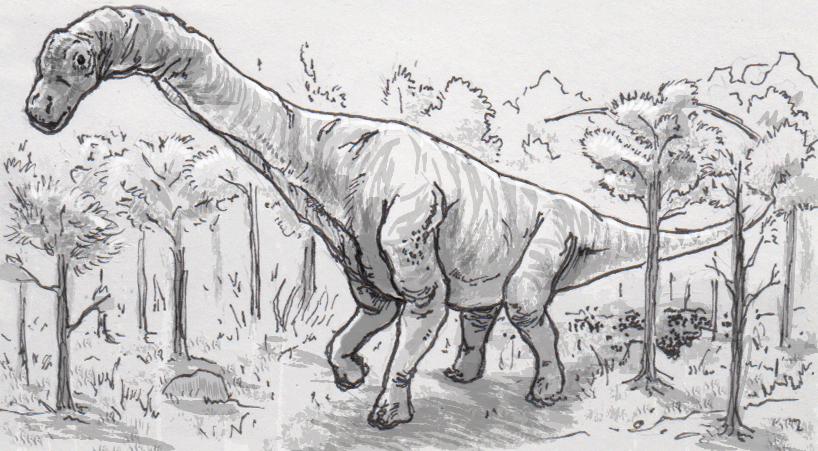 Plants love giant herbivores. It’s not that they are dying to be devoured exactly, but big eaters like a modern buffalo or ancient Diplodocus have historically helped disperse resources that plants need throughout an ecosystem. By eating plants and seeds, these unintentional gardeners break down nutrients in their digestive system, pooping them out on fresh soil in a new location. Plants’ dependency on this fecal fertilization is sometimes obvious, such as with the impossibly large pit of an avocado that evolved in conjunction with huge creatures like the giant ground sloth, Megalonyx. Other aspects of this dynamic, like nutrient distribution, are a bit more elusive, since the only direct record of that process in the herbivore’s poop itself. To study how this relationship may have worked long ago, researchers skipped looking for the poop itself, focusing instead on coal.

Coal is largely made up of carbon from ancient plants, compressed over millions of years into the black rocks we know today. It’s not completely homogeneous though, and significant amounts of other materials from the original plants can still be detected when the coal is analyzed. These data are routinely gathered as part of geological surveys, so when Christopher Doughty from the University of Flagstaff wanted to find out how much over-sized herbivores like dinosaurs impacted their ecosystems, the coal was an attractive data source.

Obviously, nobody can be exactly sure where these huge dinosaurs were dropping their dung, but the fossil record does provide evidence about where dinosaurs were spending their time. Doughty focused his study on two batches of coal deposits, with one being primarily samples from the western United States, dated to the Cretaceous period, and the other coming from Appalachia’s Pennsylvanian subperiod, a time that predated any true dinosaurs by over 40 million years. As expected, the coal, and thus the plants, from the Cretaceous had much higher nutritional levels, with an average of 136 percent more calcium, magnesium, phosphorus and sulfur. These nutrients were also more evenly distributed geographically, indicating that the dinosaurs that were depositing them weren’t congregating for extended periods of time in a single location. Based on the bathroom habits of modern herbivores, Doughty estimates that a multi-ton herbivore was likely to walk between four to 10 miles before taking needing a rest stop, making sure that no single plot of land got all the nutritious feces.

As much as these patterns make sense, it’s hard to be conclusive about this activity. To rule out non-fecal explanations for the differences between the western and Appalachian coal, like erosion or precipitation, aluminum levels were used as a kind of control. Aluminum is naturally occurring but toxic to plants, so if it was also more prevalent in the Cretaceous coal, it might suggest that these elements were added independently of plant growth cycles. However, aluminum levels were very similar from both batches of coal, indicating that changes in geology and the weather were not responsible for the enriched coal. While it’s not the same as finding a massive collection of distributed coprolites, it does look like dinosaur poop made a big difference to plants’ health.

So if plants seemed to do better when there were huge herbivores spreading nutrients near and far, where does that leave our ecosystems today? Unfortunately, it looks like human development has broken this dynamic, as we’ve purged many habitats of their plant-eating megafauna. Those that remain are also unable to roam as freely as their ancestors did, which is likely creating pockets of nutrition in places where the buffalo still roam, while leaving other areas less inviting to plant life.