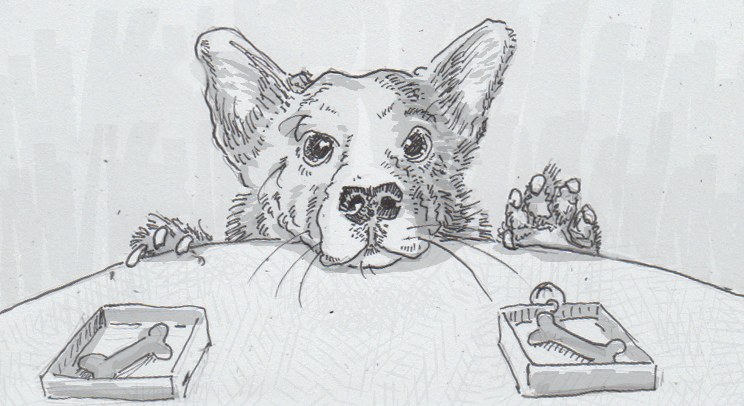 To be successfully sneaky, you need to really understand who you’re trying to elude. Do they swim deeper than you? Lighten up your belly. Do they have a good sense of smell? Hide any traces of an active metabolism. Do they seem to hear you stealing scraps from the kitchen? Maybe try to be quieter. That last scenario obviously doesn’t take place in the wild so often, but it probably feels familiar to any dog owners. As much as dogs have been transformed to become “man’s best friend,” there are still a few adversarial aspects to our species’ relationship, such as leftovers, and how to best acquire them.

While many people anecdotal evidence about walking in on the dog pilfering food off the dinner plates, researchers decided to really test just how cunning dogs could be around unattended food. The first step was to establish the base line that many households likely have, pointing out delicious-looking food to dogs and then making it clear that it was off limits with verbal commands. The food was then placed in two containers— one mundane box and one rigged with an unavoidable bell that would ring for even minor disturbances. A researcher then sat nearby, either looking at the dog, or making a show of not looking by putting their head between their knees.

The dogs then had free reign to pursue the snacks as they pleased. If humans were watching, they approached either container with equal frequency, probably hoping to get a bite in before being called off either way. But when the researcher hid their gaze, the dogs seemed to realize that they wouldn’t be seen, and thus made the effort to avoid being heard as well. In that scenario, they preferred the quiet box, apparently making the calculation that it would buy them more time to eat.

Out of sight, out of mind

There do seem to be limits to the dogs’ awareness though. While the potentially noisy containers may have made them more cautious, they only worried about that when there was obvious reason to be sneaky. If a human wasn’t clearly visible, the dogs didn’t seem to consider that they might still be nearby, and no longer tried to be quiet. As much as dogs have developed abilities to help them understand and bond with humans, they might not posses a true theory of mind, in the sense that they can’t fully imagine what someone else’s discreet thoughts and experiences. This trait isn’t common, although some tests have found remarkable sophistication in other animals, like ravens that learned to be cautious about what unseen ravens may or may not know. That cognitive gap may explain all those times my family caught our borzois scavenging along the kitchen counter, always with the same look of surprise at being caught red-handed.

Source: Who's Better at Sneaking Around: Dogs or Teenagers? by Julie Hecht, Dog Spies