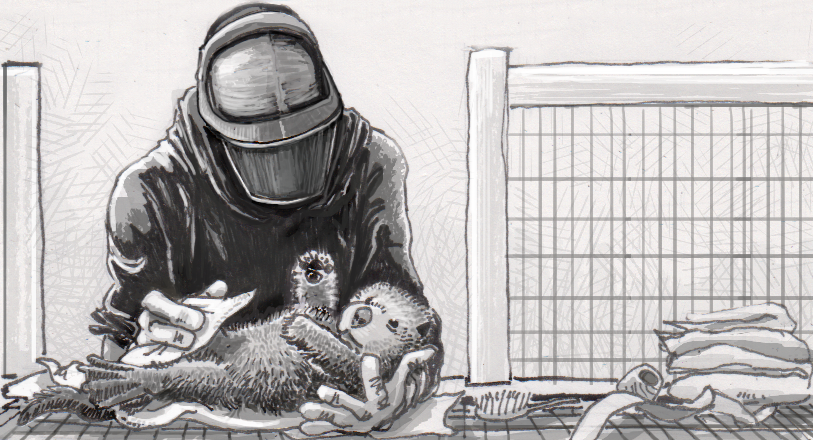 It’s so easy to fall in love with the adorable charm of a sea otter, possibly at the otter’s expense. As much as their cute faces and playful charisma may endear them to us, conservationists from the Monterey Bay Aquarium really don’t want the otters to reciprocate. Like all wild animals, sea otters stand a better chance at survival in the wild if they don’t learn to trust or rely on humans, even when orphaned at a young age. Young sea otters may need care, but only from surrogate otter mothers and people dressed as amorphous ninjas.

As their name implies, the surrogate mothers are female adult otters chosen to help raise orphaned pups. While they may never be released in the wild themselves, they ideally bond and help raise the pups, teaching tips on how to hunt, hide and live on their own. In some cases, the bond is strong enough that the surrogate will lunge, bite and squawk at human caregivers, helping the pup’s social development and reinforcing wariness towards humans, even if those humans mean the otters well.

Of course, identifying those humans may be tricky, as they dress like the aforementioned amorphous ninjas. To keep otter pups from learning to trust humans, any caregivers that hold, clean or feed the young pups dress in loose black smocks, clean lab gloves and a black welder’s mask. This way, if a young pup feels solace when being fed a bottle of “clamshake” from a human handler, they probably won’t ever see a similar handler again once released in the wild. They may grow up to find the sight of black garbage bags inexplicably comforting, but that should keep them from venturing into human-populated areas and developing dependencies on whichever people happen to be present. For the humans that are trained to help the orphaned otters, wearing the costume apparently doesn’t make the otters any less charming to care for.

Dressed for the otters’ success

These precautions may seem a bit extreme, but the success of the Monterey Bay Aquarium’s restoration projects indicates that they’re worth the effort. Since 1984, the Aquarium has been working to restore sea otter populations to their historic levels which had been reduced to tatters in the 18th and 19th centuries. At this point, the otters are no longer being hunted for their fur, but they have a ways to go before they can truly reclaim their historic range from Oregon to Baja Mexico. After raising and releasing 725 stranded otters, conservationists are seeing that the current challenges are based around a lack of kelp forests, making them venerable to sharks and making their preferred sea urchin diet less nutritious (as the urchins over-graze and then starve for more kelp.) It’s a rare scenario where an animal isn’t being directly threatened by human activity, not that they’d want a normal-looking human to get near them in the first place.