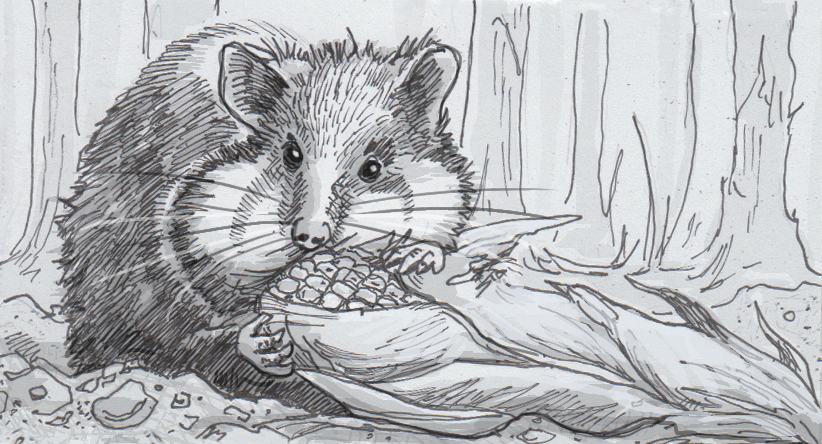 Being ‘corn fed’ may be fine for cows or chickens, but for wild European hamsters, it’s basically a threat. The hamsters, which as burrowing animals helped shape wild ecosystems all over the continent, have been in decline for some time, with populations dwindling near the farmlands of France in particular. Researchers suspected that the fuzzy rodents were possibly facing some sort of nutritional defect, and that an over reliance on some particular food source was leading to smaller litters, or possibly weaker pups that weren’t bolstering populations like they should. Experiments with the hamsters’ diets found that this hypothesis was only partially correct— the pups seemed perfectly healthy and robust, right before their mothers ate them.

Cannibalism certainly wasn’t scientists from the University of Strasbourg were expecting to see as a component of the hamster’s decline. While rodents will occasionally eat their own young, that unusually only occurs if a pup is already too weak to survive. The mother can then reclaim lost nutrients to better care for her other offspring, as well as remove potential pathogens from the nest. The hamsters in these experiments seemed to be acting according to very different motivations, leaving newborns outside their nests before gathering them in a food dish to eat otherwise healthy offspring. The mothers were agitated in general, but this degree of cannibalism was still surprising.

Fortunately, researchers were able to figure out what the hamsters ate that made them eat their babies, and that thing was corn. Corn isn’t harmful to the hamsters, but when it nearly monopolizes their diets, it leaves them without a source of niacin, also known as vitamin B3. When Europeans first imported corn from the Americas, people who lived primarily off of corn began suffering from a disease called pellagra. Pellagra’s symptoms include diarrhea, skin rashes, nerve damage, insomnia, aggression, confusion and dementia. How it hasn’t been looped into zombie folklore is beyond me, but researchers realized that the cannibalistic hamsters were showing some of these symptoms, and began experimenting with niacin supplements.

Happily, hamsters that got some extra niacin with their corn showed no signs of erratic, cannibalistic behaviors. They appeared healthy, and raised normal numbers of healthy pups. To help wild hamsters outside the lab might not be so clear cut, but it should be possible. Supplements aren’t terribly practical, but increasing the biodiversity of farms might do the trick. Currently, many farmers plant fields of corn larger than a hamster will ever explore in their lifetime, leaving them with no good way to diversify their diets. Since the hamsters help soil health, it will likely behoove farmers to look for ways to plant a wider variety of crops, helping hamsters diversify their menus in a way that doesn’t include their children.

My second grader asked: Wait— if someone ate only corn, they’re not going to start eating people, right?

Pellagra isn’t associated with cannibalism in humans, so let’s rule that out right there. It’s also possible to avoid, even with a corn-heavy diet. Native Americans that lived largely on corn products prepared them with nixtamalization. This process unlocks some of the niacin that is in corn, and allows it to be successfully absorbed in human digestion. More obvious to the peoples living on corn was that steeping cooked kernels in an alkaline solution before washing and grinding it is a great way to make some awesome food, like tamales or posole made from hominy. Even tortilla chips should help, but modern cereals and wheat-products should generally cover your niacin needs.