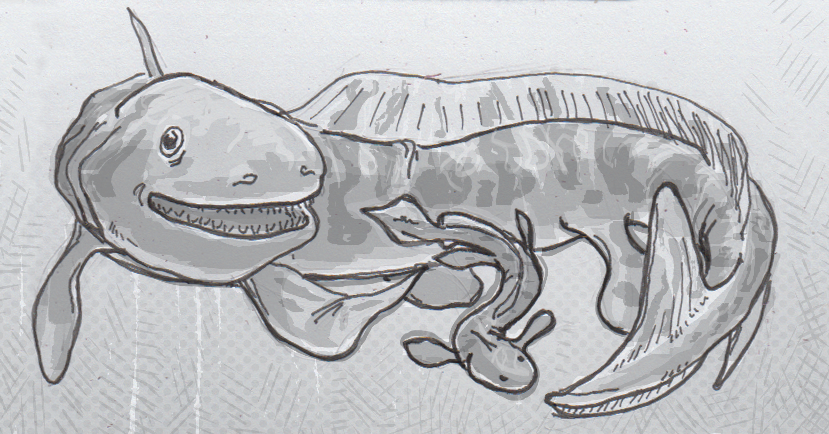 300 million years ago, nothing along the swampy shore was safe from Orthacanthus, not even its kids. The ancient shark was likely the top predator of its marshy ecosystem, hunting prey with a peculiar set of double-fanged teeth. However, when preferred food sources became scarce, these lanky sharks may even turned on their own offspring for sustenance, as bits of their babies have recently turned up in their poo.

While infanticide may sound like the sort of bloodthirsty behavior we over-associate with big sharks, Orthacanthus didn’t really look like a great white, tiger, or hammerhead shark. They grew to around 10 feet long, with a narrow body that slightly resembled an eel in its proportions. Aside from a long, low dorsal fin, Orthacanthus’ back was also adorned with a single large spine. Its low profile probably helped it maneuver the shallow estuaries were it lived, crossing between salt and freshwater like a modern bull shark.

Why swallow your own species?

None of this explains cannibalizing your young though, but eerily enough, such behavior is widespread enough that it doesn’t really need some special adaptation to occur. Many animals will eat members of their own species if other resources are scarce, or if a male sees an opportunity to eliminate the offspring of other fathers. The latter motivation more often occurs when females care for young long enough to delay mating, such as with bears during mating season. In the case Orthacanthus, we don’t have any fossil record of the shark’s motivation, but we are sure that shark ate some younger kin.

The evidence for the cannibalism itself is simply a coprolite. The fossilized poo was found with teeth from younger Orthacanthus sharks in it, which would have survived digestion and fossilization better than the rest of a shark’s cartilaginous skeleton. While that would normally only prove who was eaten, this particular coprolite was shaped quite unusually, with a corkscrew patterning that perfectly matches the oddly shaped rectum seen in other Orthacanthus specimens. So while this telltale feces can tell us what happened, we can only guess at why one shark at the other.