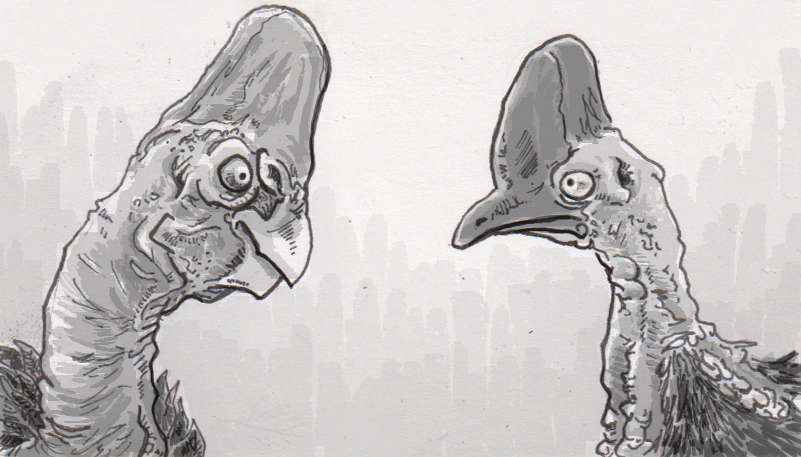 An extinct species of dinosaur discovered in China has a lot people thinking about it’s living relative. The fossil remains of Corythoraptor jacobsi were remarkably well-preserved, allowing paleontologists to describe it as something similar to an ostrich and more importantly, a cassowary. In the Cretaceous period, the animal would have stood around five-and-a-half feet tall, topped off with an impressive half-foot of bony crest on its head.  That crest is so similar to what’s on modern cassowaries that researchers have even raised the possibility that the two dinosaur species may be part of a single lineage.

So what would an ancient, ostro-cassowary be like? Even if C. jacobsi turns out to be a cousin rather than an ancestor to these modern birds, we can still deduce a lot about its life from the fossils alone. This particular specimen was probably eight-years-old, although it wasn’t fully grown yet. It was part of the oviraptorid family of dinosaurs, a group of dinosaurs that generally sported beaks, strong legs and feathers. Those feathers may have never been used in flight though, as they were much fluffier and fringed than the plumage required to fly. Like modern ratites like ostriches, emus and yes, cassowaries, these creatures’ feathers most likely helped with showing off to peers, camouflage, and insulation against heat and cold.

Interestingly, there’s a chance that the tall, flat crest on C. jacobsi’s head served some of those purposes as well. Like a modern cassowary, the crest, or more specifically, casque, wasn’t a solid lump of bone. It was composed of various layers that would have allowed for empty cavities, blood circulation and more. These features suggest a range of uses, including a way to vent heat like a toucan’s bill, show off to potential mates or rivals, and possibly even emit low-pitched vocalizations. Much of this speculation isn’t due to mysteries specific to C. jacobsi’s casque, but that we’re not actually sure what cassowaries do with their heads either.

Figuring out the casque’s function

Cassowaries aren’t easy to observe in the wild, partially thanks to their small ranges in Australia and New Guinea that are difficult to traverse, much less follow occasionally dangerous, six-foot-tall birds. It’s been suggested that their casques protect them from falling fruit, possibly help them dig through loose soil, and vent heat. Their striking appearance is hard to ignore, even among brightly colored plumage and wattles, which begs the notion that they’re a display feature of some sort. Casques are found on males and females, although they tend to be bigger on females which supports the idea of some kind of sexual selection at work. Male cassowaries help with child-rearing, and so both sexes may have reason to be choosy about the health and stature of their partners. Finally, cassowaries are famous for emitting deep, booming vocalizations, and their crests may help them make or possibly hear those calls across long distances.

Understanding the casque on cassowaries and C. jacobsi may end up advancing a few different ideas about dinosaurs. If the value of a good casque can be pinned down, it may help us better understand crests on more distantly related species as well. While head crests were not uncommon among oviraptorids, they’re also found on other groups of dinosaurs, like “duck-billed” hadrosaurs. Of course, there might be more than one use for a huge lump on one’s head, but the resemblance between C. jacobsi and cassowaries raises hopes of a more direct comparison.

Source: Newfound Dino Looks Like the Creepy Love Child of a Turkey and an Ostrich by Laura Geggel, Live Science