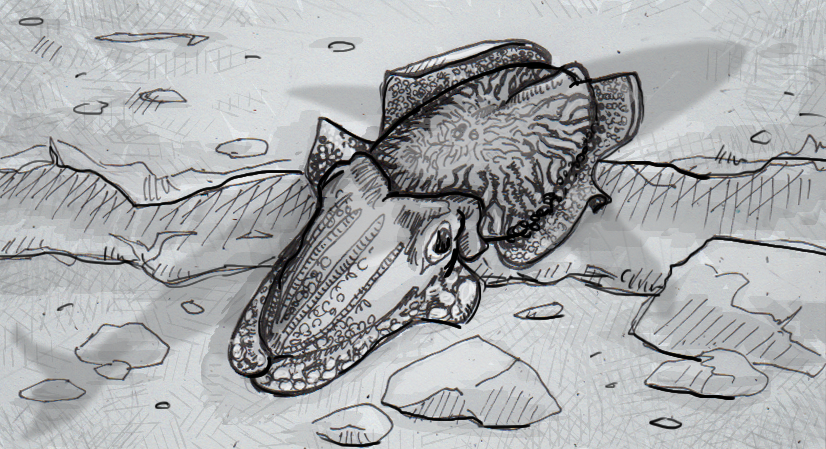 Camouflage can only do so much to keep a tasty animal safe from predators. Even if you’re able to change color and texture nearly instantly like a cuttlefish (Sepia officinalis), chances are your predators have evolved some counter measure to help themselves stay fed. If you’re being hunted by a something like a shark, you’ll have to escape more than just on their eyesight, as smells and even the faint electrical activity of your body may tip off your location. Fortunately, it turns out there’s a way to hide that as well.

The electrical activity in question is present in just about all living bodies. Basic metabolic functions creates a trail of ions that can escape the body in what’s called a “bioelectric field.” In a resting cuttlefish, this field is only 10 to 30 microvolts, which thousands of times less than even a AAA battery. However, that’s enough for the sensory organs along a shark’s face called Ampullae of Lorenzini to detect. These organs around the shark’s mouth and lateral line allow the shark to use electrolocation, which is sort of like radar for the electrical activity of animals. It’s especially useful in the ocean, where the salt water helps conduct tiny amounts of electricity, increasing the reliability of this sensory information.

Fortunately for the cuttlefish, its bioeletric field is tied to its respiration, and it knows it. When shown a video the shadow of a shark or predatory fish approaching, cuttlefish were observed utilizing not only their visual camouflage, but also holding their breath and covering their siphons until the simulated threat passed. Since the siphons are where the most ions were expelled during respiration, the cuttlefish was able to reduce its detectable electrical activity to just six microvolts. To ensure this was more than a reflex, they were also shown similar video of an approaching crab, which didn’t prompt such a response from the cuttlefish.

On the other end of the equation, researchers also tested if these fluctuations in the cuttlefish’s bioelectric field made any difference to a shark, or if the predators were one step ahead in this evolutionary arms race, ignoring the efforts to hide. At 10 to 30 microvolts, the black tip and bonnethead sharks were all quick to try a bite of the dummy cuttlefish. When the electric output was lowered to six microvolts, the sharks’ interest was cut in half. Certainly not a garauntee of safety, but definitely worth the effort of holding still when you’re already in range of a predator’s mouth. Cuttlefish who lose this gamble do have one more option, which is to jet away in a cloud of ink. The catch is that this final tactic completely exposes their presence, and probably entices the shark, as the taste and smell of cuttlefish ink seems to be a pretty solid indicator that lunch is nearby.