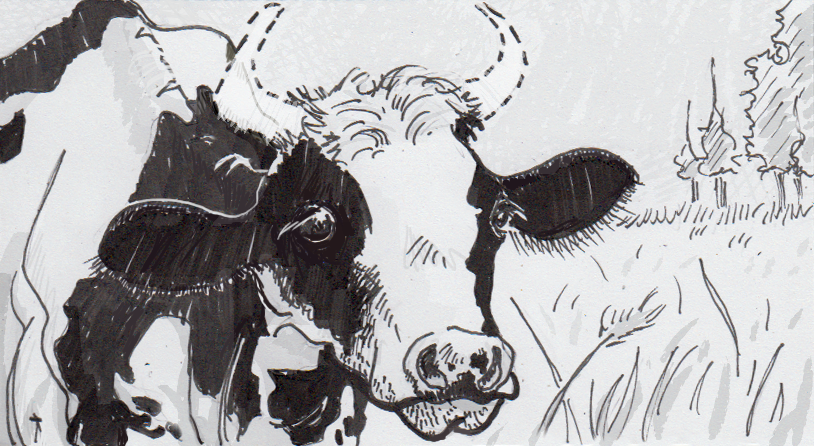 Cow domestication and the hunt for hornless Holsteins

When you think of a “dairy cow,” you probably picture a large animal with black and white spots, pronounced udder and maybe some small, curled horns. This breed, called a Holstein, is the source of the majority of milk consumed in the United States, and is able to do so thanks to generations of selective breeding for better milk production. There’s now a new push to adjust their breeding further, not to increase any properties of their bodies but to actually remove some anatomy entirely— their horns.

Cows have been altered significantly since they were domesticated. Their wild ancestors, the Auroch, was a more athletic, large-chested animal, as tall as it was long. Significantly, they had large horns and small udders, barely visible even when a cow was pregnant. Selective breeding by humans have obviously reshaped the species into a variety of domestic breeds, with Holsteins now prized for their milk production and fertility. The horns are a remnant of their ancestry, and can actually be a problem now that the cows live on closed ranches instead of the open ranges of Asia.

Hands-on approaches to getting the horns off

Even smaller horns can lead to injury to both other cattle and their human caretakers, and as such most ranchers and farmers will surgically remove them when the cow is young. One method involves cutting the horn buds off two-month-old calves with knives, wires or saws. The process is risky, as it leaves the calf open to infection afterwards. A preferred method, called disbudding, kills the horn buds at an earlier age, before they’ve attached to the calf’s skull. A hot iron kills the horn tissue without risk of infection, although the buds themselves are sometimes manually removed instead. While the latter method is safer, both concepts rely on proper administration of pain killers to keep the calf from being distressed by the process, but this may not always be done sufficiently.

The cow-friendly solution to all this may be to breed cows to be hornless in the first place, saving all parties the ordeal of disbudding or dehorning, and making consumers happier about the source of their milk. The genes for hornless cows are fortunately dominant, so breeding for hornless offspring has at least a 50 percent chance of success. This doesn’t mean we should expected the end of horned cows overnight though, as selective breeding takes generations to really take hold (as compared to direct genetic modification, where each and every cow would have its horn-growing genes suppressed while gestating.) Farmers are also wary of loosing some of the milk-producing traits they’ve bred into the breed, as well as trying to expand the pool of hornless cows too quickly, resulting in inbreeding.

Source: Wanted: More Bulls With No Horns by Abbie Fentress Swanson, The Salt