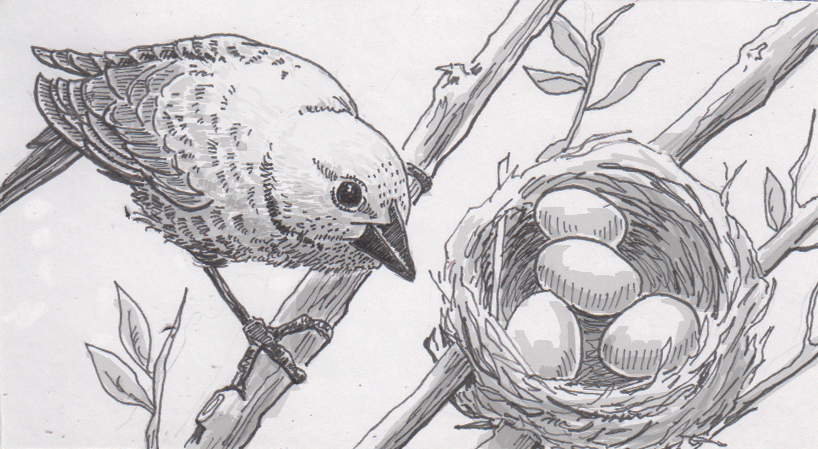 All parents want the best for their children, even if their plan for parenting is to abandon their offspring with an animal from another species. Brown-headed cowbirds (Molothrus ater) are brood parasites, meaning they lay their own eggs in the nest of another bird so that that mother can put in the work and resources of raising the new cowbird alongside her own. Some brood parasites, like cuckcoos, will even go as far as destroying the original eggs in a nest, but cowbirds are usually a kinder, more thoughtful absentee-mother, as they’ve been observed showing a keen appreciation for their own baby’s possible nestmates.

Scouting out the right surrogates

Over five years, researchers found themselves syncing up with brown-headed cowbird moms. Both the humans and the birds would patiently sit and watch for signs of other mothers building their nests, such as collecting twigs and fluff, then following them back to their nursery-in-progress. The cowbirds were found to be as observant as the humans, and they weren’t interested in every nest they came by, despite normally laying their eggs in any of 200 different species of bird. Over time, the pattern emerged that the cowbirds were looking for nests that had smaller-than-average eggs in place as the ideal home for their own offspring.

Smaller host eggs are likely being selected as a way to boost the baby cowbird’s success. Among larger eggs, the cowbird egg would receive a smaller share of incubation, and possibly more competition from more robust step-siblings. Smaller eggs mean that more of the incubating mother’s butt will be available for the cowbird egg, giving the parasite a better shot at a healthy hatch. So while cowbird moms do say goodbye to their offspring when they secretly leave their eggs in another nest, they are bothering to make sure it’s the best possible nest for the baby they’ll never know.

Equal chances for every eggs

That said, there’s only so much the cowbirds can do in a situation where they have to essentially lay and egg then hope for the best. Researchers compared the amount of yolk in the deposited eggs, and found no further clues about how cowbirds manipulate their offspring’s odds. In this case, researchers wondered if a more perfect nest might receive an egg with more yolk, increasing the baby’s probable health while draining more resources for the mother. However, apparently the cowbirds start producing their eggs before finding a nest, or they don’t have that much faith in their surrogate selection, as yolk sizes didn’t seem linked to nest attributes at this point. It seems that the cowbirds can only look at the potential parents and the size of their actual offspring before leaving an egg and hoping for the best.

Probably not. Genetic tests indicate that cowbirds aren’t monogamous, and with females laying eggs for multiple fathers every season, there’s a good chance that the male birds don’t invest themselves too heavily in any single egg.