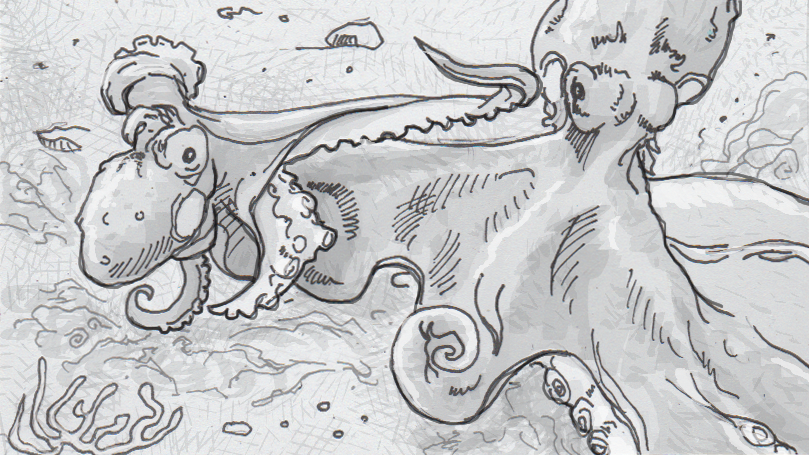 Octopuses have been doing great in Jervis Bay, Australia lately. So well, in fact, that things are starting to overcrowd and demand some new social behaviors from the normally solitary animals. While there still seem to be enough scallops to keep everyone well fed, a lack of real estate has been leading to infighting among the cephalopods, from “boxing” to potentially inventing new forms of projectile weapons.

Not looking for company

The combatants are a species called gloomy octopuses (Octopus tetricus), and like most octopuses they normally live alone. During the day, they like to camp out in a projected den, like a hole under a rock or shell. To project these homes, they’re known to sometimes collect debris to scare off nosy fish or other uninvited guests. This usually involves pushing sand with a jet of water from their siphon, a piece of anatomy normally reserved for propulsion through the water.

The dense population of Jervis Bay seems to be bringing out the worst in the octopuses though. They’ve been observed in “boxing matches,” pushing and striking at each other with their tentacles. Homes are being seized by larger members of the community. And the use of debris as weapons seems to be increasing.

Pitching a fit (and a shell)

Throwing debris seems to be becoming more common and more deliberate. Octopuses are lifting up objects like shells or small rocks, blasting a jet of water from their siphons then throwing the objects along that newly created current of water for better speed. While it’s risky to attribute motivation from initial observations, these potentially aggressive actions seem to be hitting other octopuses at a much higher rate than chance, indicating some degree of purpose.

If the gloomy octopuses are purposely taking up arms (sorry) against each other, they’d join an elite group of animals known to use artificial projectiles as weapons, including stone-throwing elephants and apes. It wouldn’t be a huge stretch of the imagination though, as octopuses are known to be very intelligent, with some species like the blanket octopus creating weapons out of Portuguese Man o’ War tentacles.

My first grader asked: Can people help them? Are they ok? In this case it looks like the lure of scallops is still keeping the population at least partially pacified. Aside from stealing shelters from each other, these fights don’t seem to be leading to significant injury, as they octopuses are probably just asserting rights to territory more than looking to cause harm. However, if the food supply dimishes, things could get uglier as the species has been known to practice cannibalism.