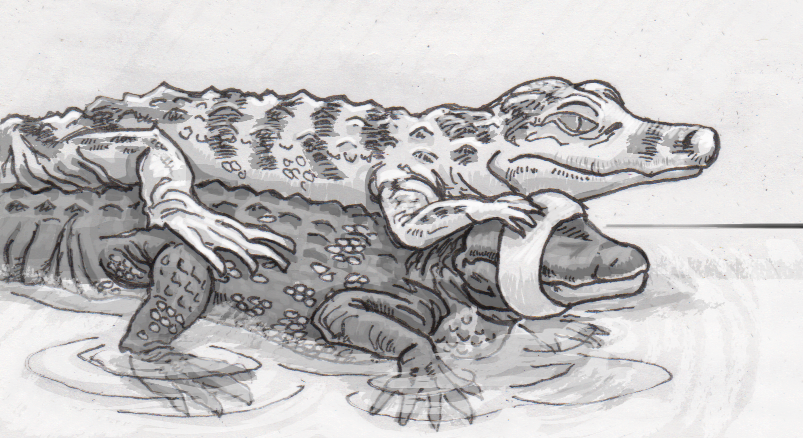 Crocodiles can change their skin coloration based on environmental color cues

Few predators would antagonize an adult saltwater crocodile (Crocodylus porosus). Weighing close to a thousand pounds, these huge reptiles have little to fear in their local ecosystems. Their hatchlings, on the other hand, are usually around 2.5 ounces at birth, and need to be a bit more wary about becoming someone’s lunch. To stay safe, these tiny crocs, as well as other members of the Crocodylidae family, have developed the ability to better hide themselves by changing the color of their skin. Through a series of experiments, researchers have been able to isolate the exact mechanisms that allow these scaly predators to obscure themselves according to environmental conditions.

Shading skin according to what they see

The color changes in question are noticeable to the naked eye, assuming you’re comfortable staying in proximity to a crocodile for 60 to 90 minutes. While no crocodile was observed creating new patterning or bright shifts in hue like a chameleon, they could shift their skin from lighter to darker shades of their normal coloration. Members of the Crocodylus genus, like saltwater crocodiles, would make their tails, backs, and heads turn darker in darker environments, while members of the Gavialidae family did the opposite, lightening their backs when placed in dark environments.

In the context of this study, dark environments consisted of black or white tubs of water. It was easy to see the crocodiles change color according to their surroundings, but researchers needed to make sure that this was really triggered by what each animal was seeing, rather than other conditions like body temperature or stress levels. One way to do this was to place a crocodile in one color tub, blindfold it, then move it to the opposite lighting conditions. In those cases, the crocodiles’ coloring didn’t change according to the new environment- they kept the color that matched the last environment that their eyes were able to see. This was fairly conclusive, particularly after factors like temperature and stress hormones were found to be consistent between light and dark tubs. Finally, tests with red lights, which crocodiles don’t see as well as colors like blue, showed that if the crocodile didn’t visually perceive the difference, their skin didn’t react either.

Of course, visual stimulation can only be part of the story. Researchers also examined the crocodiles’ skin to see how it could change color once the animal noticed it was in a dark or light environment. They found that an α-melanocyte-stimulating hormone was released in the body, which triggered changes in cells’ melanosomes. When a crocodile needed to darken, the pigment in the melanosome would spread out, increasing the percentage of each cell that would absorb light. When a crocodile lightened, the same melanosomes would contract into tight packets, leaving more surface area without pigment to absorb light. This expansion and contraction is all that’s needed to achieve the relatively quick but reversible color change seen across multiple species’ skin.

Estimating when this abilities evolved

The species of crocodile that change colors revealed some information about when this ability likely evolved. Alligators, for instance, don’t change colors, which suggests that this ability had not developed when that family split from Crocodylidae 80 million years ago. Outside the genus Crocodylus, two African members of Crocodylidae showed little to no color-shifting ability, which then suggests that this trait evolved after that branch in the family tree occurred 30-40 million years ago. However, Crocodylus diversified a lot around 12 to 17 million years ago, so researchers assume that this trait was likely established by then in order for it to turn up in species that have since become separated from each other.

My third-grader asked: Do adult crocodiles do this too, or is it just the babies? Why do some of them turn the opposite color? Are they sure the pigment isn’t to help prevent sunburns?

The tests were done with baby crocodiles, possibly because they’re a lot easier to move between tubs of water. However, adults would benefit from dynamic coloration, as hiding from prey would aid in the ambush-style hunting crocodiles typically rely on.

The benefits of Gavialidae crocodiles’ reversed coloration wasn’t directly tested in this study. Researchers speculate that it acts like a form of countershading, similar to the way a shark’s white belly makes it harder to see when viewed as a silhouette from below. If true, this further supports the notion that adult crocodiles make use of these abilities to help them surprise their prey.

The sunburn question was likely sparked by Claude, the albino alligator living at San Francisco’s California Academy of Sciences. As an albino, Claude had no pigment it his skin, putting him at greater risk from ultraviolet light damage (and predation! and being spotted by prey!) While it might seem handy to be able to activate built-in sunscreen on command, it’s hard to see how that would benefit an animal more than good protection all the time. Since these animals mostly live in equatorial regions, they wouldn’t really have a pressure to decrease their ultraviolet light protection at any point, making the perception to hormone to melanosomes system needless complicated. Temperature control would seem like a better tool for a cold-blooded reptile to have, but the study directly controlled for temperature changes, and found that it didn’t influence the crocodile’s coloration.