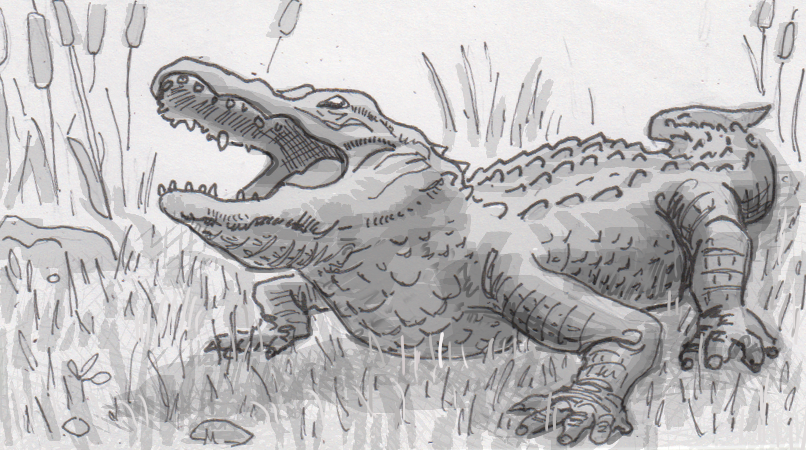 Crocodiles’ resonating bellows reliably broadcast how big a beast they are

Alligators and crocodiles are often depicted as yet another scary set of teeth in the world, but scientists have been finding that there’s a bit more nuance to their lives than simply lying in wait for their next meal. They’re actually one of the better communicators among reptiles, squeaking, hissing and “bellowing,” even before they hatch. Since chatty reptiles are a rarity compared to loud birds and mammals, researchers have been looking at exactly how and what crocodilians might be communicating with their various noises. Of particular interest is the groan-like bellowing, which seems to be used to find mates and scare off rivals.

Sound is the result of something vibrating and causing pressure waves in some medium, like air or water, but the source of the initial vibrations can vary, even within a single animal. To figure out exactly how a crocodile’s body is vibrating to produce the low, growly bellows, researchers devised an experiment that would reveal if bellowing involved the exhalation of air like humans speech, or if it was just vibrating muscle and throat tissues. They put a crocodile in a special enclosure that had a lot of helium mixed into the air, since the sound would move faster, and thus at a higher pitch, through helium than normal air. Just like your voice after inhaling helium from a balloon, the crocodiles’ bellows were just a bit squeakier, confirming that these large reptiles are indeed using resonance when sounding off.

Building off this confirmation, a separate study looked at what information crocodiles and alligators might be sharing when they bellow to each other. A likely bit of information would be to advertise one’s size and fitness to others, as alligators have been observed vocalizing a lot more during mating season than when they’re more content to be swimming solo. A bigger alligator would benefit from exhibiting their size, as it might better attract a mate and scare off would-be challengers, saving needless and potentially costly bloodshed in the process.

To test the relationship between a gator’s size and sounds, researchers carefully measured the pitch of a bellow and the size of the animal producing it. They found that vibrating vocal tissues could create a variety of different pitches, with no real correlation to the size of the alligator. Bellowing was a more reliable gauge of the vocalist though, with pitch very accurately corresponding to an alligator’s size. This means that bellowing crocodilians are quite honest with each other when communicating, keeping the system a reliable way to sort themselves at the singles bar.

Source: In both love and war, alligators signal size by bellowing by Stephan Reber, Sceinmag