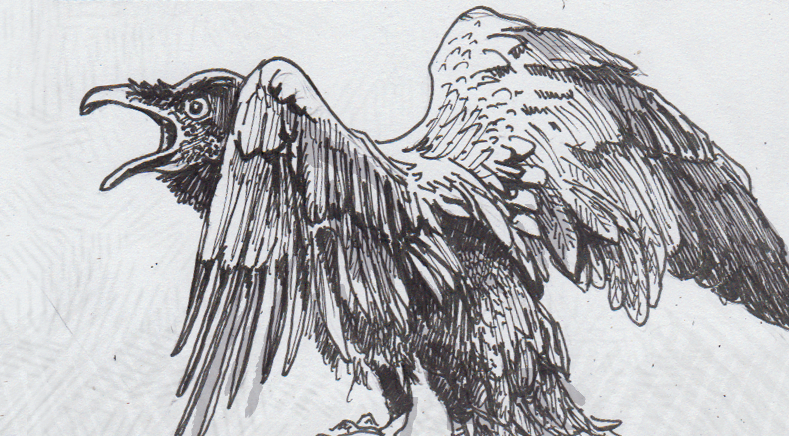 Picture, if you will, a man in a generic, rubber Halloween mask standing motionless in a field. He is surrounded by a mob of agitated, cawing crows, who can’t ignore him but also don’t dare approach. They are fixated first on the dead crow in the man’s hands, which he gently holds in front of him, as if it were on a platter. But importantly, the crows are also learning the man’s face, so that his visage will not be forgotten when he returns to the field again.

This might sound like some weird cult scenario, but it was actually research being done at Washington State University. The person in the mask would have been one of a series of volunteers who would wear a mask while confronting the crows with a series of stimuli in order to learn what they were after when confronting death. Crows have long been known to have dramatic reactions to their dead brethren, cawing and jumping around the dead birds’ bodies, and researchers were tying to isolate what motivated that behavior.

First the researchers lured crows to a location with daily offerings of treats. Once a routine was established, a second participant would visit for up to 30 minutes wearing a mask and holding a dead crow so that it was plainly visible. The crows became upset, and would caw and “scold” the masked researcher until they left. The next day, if the birds saw the same face return (which was easy thanks to the mask), they would upset the murder of crows all over again, even if they didn’t have a dead crow to display anymore. This led the scientists to suspect that some of the reaction to the dead was not necessarily to grieve the lost life, but to draw attention to a threat for the benefit their fellow crows— this mask-faced person is dangerous! Keep away from them!

To further test the birds reactions, different versions of this scenario were performed on different groups of crows. One variation found that the presence of a taxidermied hawk next to the dead crow warranted the largest reaction from the living crows, as it seemed to be the most obvious threat to worry about. Another variation found that crows aren’t interested in all deaths (after all, some dead bodies might be lunch) as much as they care about seeing a corpse they could identify with. Seeing the masked researcher with a dead pigeon was no where near as interesting as seeing them with a dead crow.

Obviously, just about everyone can benefit when they learn from the mistakes of others, and many human safety regulations have been set up in reaction to what have turned out to be preventable deaths. But the researchers see the crows’ interest in the face (or mask) of the human participant as a more specific adaptation. Since humans can be dangerous or helpful, crows has a strong incentive to quickly identify which of us is which, and news of such a “dangerous” human is obviously worth sharing with one’s community.