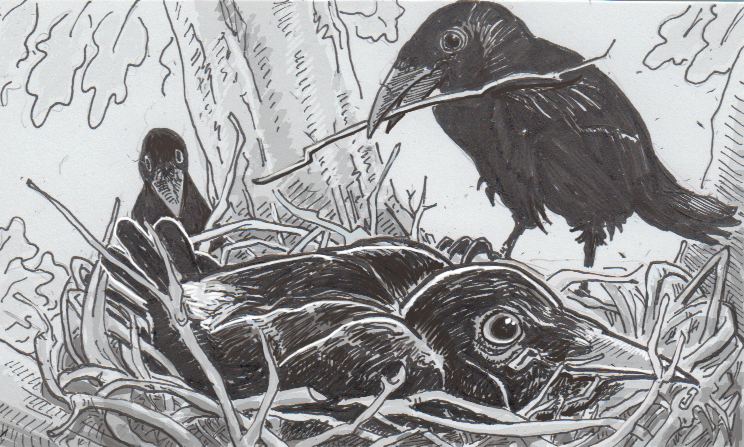 Crows (situationally) stick around to care for their new siblings

A big part of a crow’s upbringing is learning a commitment to family. As active, social communicators, crows will watch after their neighborhood, help fledglings beginning to fly, and even warn others of potential dangers in the area. Adult crows often help their own mothers build nests for younger broods, pitching in multiple years in row and showing how important such bonds can be. Except, of course, when they aren’t raised this way, in which case, they don’t lift a feather.

Siblings assisting with the care of siblings isn’t an idea unique to crows. Elephants will look out for younger siblings, nieces and nephews. Chimpanzees often receive care from older sisters. And of course humans are frequently tasked with taking care of younger siblings as soon as our parents are convinced it will give them a break to get off their feet for a minute or two. For crows, this care-giving doesn’t involve as much playtime as nesting time, where adult children will eagerly deliver sticks and twigs for their mother to construct a nest. Once completed, the birds may assist with bringing food to their mother and even the chicks once they’re born. They’ve also been observed just wanting a peak at newborn brothers and sisters, possibly to express how cute they are.

No motivation to move out?

This is probably great for the crows’ mother, but it’s a trade-off for the children. Sticking around until they’re two-years-old to assist with new siblings crosses into time that these birds could be having their own children. Beyond that, not all crow populations participate in this sort of familial care-giving, instead leaving their nest as soon as they were able to do so without looking back. With these variables in mind, scientists wanted to see what motivated these different behaviors. Was it a choice? Were groups of crows driven by instinct, or just a mother who could really lay on the guilt-trips?

The fact that these behaviors varied by population and not individuals allowed researchers to conduct a fairly straightforward, if slightly creepy, experiment. Eggs from Swiss carrion crows (Corvus corone), which usually leave home, were swapped with their Spanish counterparts, who are known to stick around and help out with the family. If the crows acted like their genetic parents, they’d go against the grain of their adopted community with the adopted Swiss crows leaving home and the adopted Spanish crows wondering why their mom was trying to get rid of them so quickly. The opposite proved true though, where the adopted crows blended in with their new communities, indicating that these nurturing behaviors were taught as part of the local crow culture.

Just because there wasn’t a strict genetic component to these doting brothers and sisters, that doesn’t mean that there weren’t some pressures or influences that would support acting in one way or another. Fortunately, the Swiss and Spanish crows offer clues there as well. Switzerland’s climate forces crows to migrate outside their native territory to find food, leaving the birds to fend for themselves, not necessarily reuniting each spring. The Spanish crows didn’t face this pressure, and could hang out with their families for a long time. In doing so, they’d help ensure the success of their family’s genetics, as siblings share a lot of the DNA they’d be replicating in their own children. It would also give them a chance to essentially play house, practicing and learning about nest building with their mom before having to figure it out on their own. This extended training seems to work well for crows and their corvid brethren, as 40% of these big-brained birds have been found to help out around the nest, even if the majority of birds in general move out as soon as they get the chance.