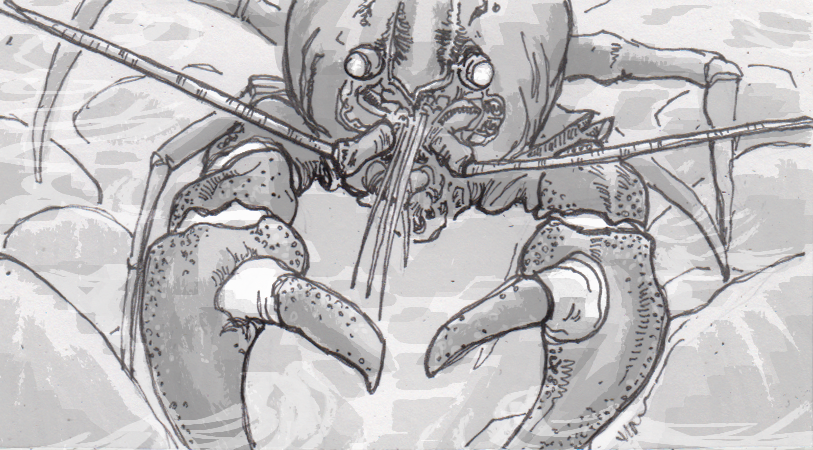 Is it possible to be too good at your job? Looking at the signal crayfish, it seems that the answer is yes, depending on the context. In their native freshwater streams and lakes of northwestern North America, these crustaceans are keystone species, as their daily activities greatly impact their environment. By burrowing into shorelines and eating dead plant material, signal crayfish can alter disperse nutrients, alter water quality and even affect the shape of a stream itself. Equally importantly, these crayfish are notably hardy creatures, which has enabled them to take their environmental engineering skills to no locations that have no way of coping with them.

As signal crayfish (Pacifastacus leniusculus) have increased their range over the last hundred years, the creatures that have suffered the most have been other crayfish. Compared to California’s sooty (Pacifastacus nigrescens) and Shasta crayfish (Pacifastacus fortis), signals grow to a relatively large eight inches long, lay more eggs, mature faster, and spend more time caring for their young. Since signals are happy to eat anything small enough to get their claws on, they’ve been able to make short work of competing species, pushing sooty crayfish to extinction and reducing Shasta crayfish to just a few hundred individuals. The smaller crayfish can barely even hide, as signals are known to walk across land for larger distances, expanding their range at a rate of a half-mile a year.

If signals all of the above weren’t enough to lead signals to total crayfish dominance, humans have pitched in to help. In 1907, a plague decimated European crayfish (Astacus astacus) populations, which were a popular source of food in Sweden and Finland. So in the 1960s, signal crayfish were introduced because they are also tasty, and seemed robust enough to handle being transplanted on the other side of the planet. Ignoring the impact signals had on California ecosystems, people also overlooked the fact that signals are carriers of the same plague that attacked European crayfish in the first place. Being immune to that disease themselves, they’ve had a very easy time spreading across Europe, with Ireland being the last country to to not be overrun.

At this point, concerns have shifted from native crayfish to salmon. Signals have turned up in Alaska where there are no native species of crayfish to compete with, which means the local fish have no natural defenses against hungry crustaceans with big claws. The fact that signals release sediment into the water as they burrow may prove problematic as well, since the sockeye salmon aren’t used to looking for plankton in murky water.

It may seem like no other crayfish is as powerful as a signal, but other species are invading each other’s territory around the world. Out of the 400 species that live in the United States, many are being threatened by other invasive species, like the rusty crayfish (Orconectes rusticus) and red swamp crayfish (Procambarus clarkii). At this point, these tough critters may be hard to stop, but hopefully humans will at least stop helping them spread.

My third-grader asked: Why are they called “signal” crayfish?

They’re named for the white patch at the joint of the their claw, which maybe looks like a signal light flashing as they open and close their pincers.

Source: The Unassuming Crayfish—and Its Path of Devastation by Jason Bittel, NRDC