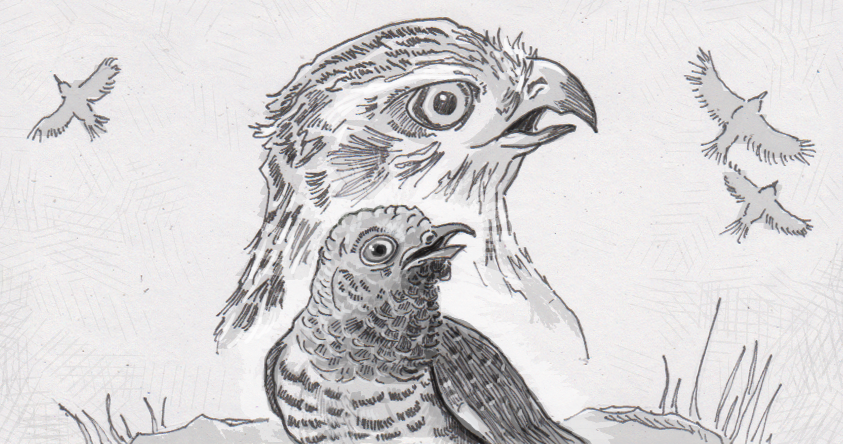 Cuckoos copy the sounds of bigger animals to keep their eggs, and themselves, safe from harm

As hundreds of years of clocks have taught us, the cry of a cuckoo sounds like “coo-coo, coo-coo,” unless that cuckoo chooses to sound more like a hawk or peccary. The call used as an hourly chime is actually only used by certain male cuckoos, and while it’s striking enough to inspire the birds’ name, it’s certainly not the most strategic sound they can make. Two studies have found that in addition to passing their eggs off as belonging to other birds, cuckoos are also rather adept at mimicking the sounds of other animals to keep their eggs, and themselves, safe from discovery.

While male cuckoos’ calls helped name the birds, the behavior of the females is what really made them famous. The common cuckoo (Cuculus canorus) is a brood parasite, which means they hide their own eggs in the nests of other species like reed warblers (Acrocephalus scirpaceus) or blue tits (Cyanistes caeruleus). If the egg is recognized, the would-be surrogate parents will generally destroy it, as they don’t want to accidentally invest resources in caring for the cuckoo’s offspring. However, if the warbler or tit parents don’t detect the parasite, they will raise and care for it as their own offspring.

Cuckoos have adopted a number of strategies to help get their own eggs into other birds’ nests, including pushing other eggs out or evolving to lay eggs with a similar appearance as the host’s. Now researchers have found that the females will make a sound imitating a hawk or sparrowhawk right after laying their own egg. It appears that this call is meant to scare and distract the nests’ owners around the time they might discover the new egg so that they don’t scrutinize it’s appearance as closely. Once they realize no hawk is bearing down on them, they’ve already started to get used to the new addition to their clutch.

To confirm this hypothesis about the cuckoo’s hawk impression, scientists conducted experiments with various wild birds. They played recordings of different species of birds in proximity to brooding reed warblers and tits, then measured the intensity of the birds’ reactions. The nesting parents paid little mind to the sound of a dove or male cuckoo, but both hawks and female cuckoos were found to be quite alarming, spurring them to observe the area around, but not in, their nests very closely. In a second phase of testing, researchers looked at how well nesting warblers noticed balsa wood eggs when distracted by these sounds, and found that a well-timed distraction was very effective at helping an egg get assimilated in a nest.

In Central South America, Neomorphus ground cuckoos have evolved a very different sort of audio mimicry. These birds have been found to trail herds of wild peccaries that plow through underbrush, eating the insects the foraging mammals stir up. As they travel, the peccaries often make a distinct clacking sound with their teeth, which is thought to warn off would-be predators. From the sounds of things, the cuckoos have picked on this strategy, and now clack their own beaks to sound like the peccaries.

Clicking a beak isn’t unheard of in the larger cuckoo family, as birds like roadrunners also make percussive sounds with their mouths. However, close analysis of the cuckoo clacks found they were much more similar to the sound of a peccary than the birds’ own relatives. This suggests that imitating the peccaries offer’s some advantage, which is probably to ward off predators that may mistake the cuckoo for a more dangerous herd of peccaries. Alternatively, the birds may be clacking to communicate with the peccaries themselves, and are sounding off as guards for the foraging mammals in exchange for protection. Researchers hope to follow up on this study, specifying which goal is motivating the cuckoos.

My third grader asked: Do the ground cuckoos also hide their eggs in other birds’ nests?

Nope. While the common cuckoo draws a lot of attention, their brood parasitism isn’t actually the most common parenting strategy. Most members of the Cuculidae family tend for their own eggs. For better or for worse, it should also be noted that there are other brood parasites out there. Cowbirds, for example, even bother to scout potential parents before hiding their eggs in their nests.