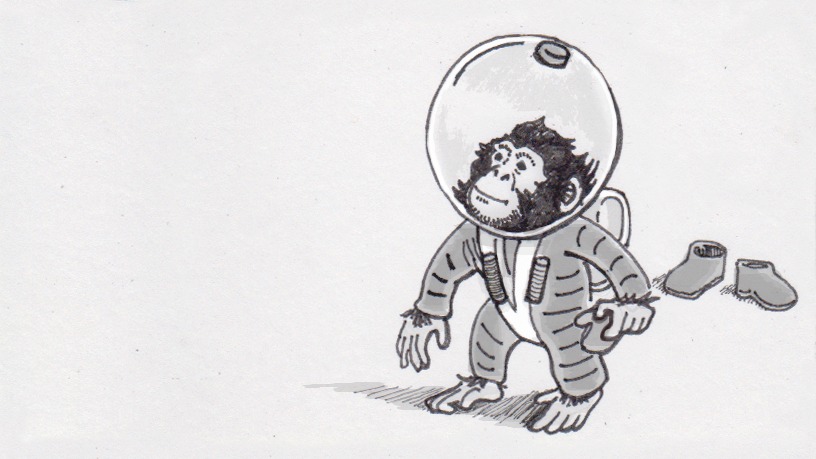 It would obviously be absurd to suggest that NASA planned the Mercury space program on H.A. and Margret Rey’s children’s book, Curious George Gets a Medal. In the book, George the suspiciously chimp-like ‘monkey’ is depicted destroying property, stealing farm equipment, and rustling cattle, none of which were really prerequisites for the animals NASA did send into space. Nonetheless, the book does seem to somehow predict a key milestone in Project Mercury, most specifically the successful voyage of the chimpanzee No. 65, or Ham as he was later known.

Curious George Gets a Medal was published just a few weeks before the Soviet Union sent a dog named Laika into orbit in 1957. However, animals traveling to space wasn’t a completely novel idea at that point, as the United States and Soviet Union had been sending everything from fruit flies to monkeys into space since 1947. However, an important distinction that Rey somehow predicted years before NASA was the need for the passenger organism to do something during their flight. At the time of the book’s publication, monkeys like Albert I were noted largely for their mortality rates, even though they traveled in restrictive harnesses with no real autonomy inside their V2 rockets.

Some of the similarities between Curious George and Ham could probably be explained by the necessary optimism needed for a kids’ book. It’s not exactly ‘fun’ to see a small simian strapped into a metal tube, so obviously George’s situation needed a bit more levity in the presentation. However, similarly to George’s origins in Africa, Ham was also captured in Cameroon when he was young (having been born in 1957, coincidentally enough). Like George, Ham was also noted for being a good, cooperative little chimpanzee. Just as the fictional monkey behaves a lot like a curious toddler, Ham’s handler remarked that Ham “…performed so well and was a remarkably easy chimp to handle. I’d hold him and he was just like a little kid.” Ham probably never destroyed a dinosaur exhibit in a museum, instead using these traits to excel among the other chimps competing to fly in an MR-2 rocket in 1961.

One detail omitted from Curious George Gets a Medal was the motivation behind flying a curious monkey in a rocket in the first place. The one clue is that George was not meant to be a passive passenger, as he had to pull a lever in a specific time frame so that he could eject from the rocket before it continued into deeper space. This isn’t explained in much detail, but again, it was very similar to the goals NASA had for Ham on the chimp’s test flight. In 1959 a rhesus monkey named Sam had been allowed to move his arms during his test flight, but before researchers wanted to confirm that an animal could not only survive, but also concentrate and function while in microgravity. To this end, Ham was trained to pull a lever on the dashboard in front of him withing five seconds of seeing an illuminated blue light. Ham did very well, responding to cues only a touch slower than on Earth. The fact that his pressurized spacesuit also performed well when a seal broke further cemented the notion that NASA was ready to launch a human in a rocket, paving the way for Alan Shepard’s historic flight.

As the name of the book implies, Curious George pulled his lever as instructed, and lands on the ground a hero. He is awarded a medal for being the “First Space Monkey,” which obviously missed a few bits of history, but otherwise wasn’t too far off the mark. Up until the flight completed, Ham had been known as No. 65 in order to make his possible death easier for the public to accept. So when the chimp survived the flight, he was essentially awarded a name, based off the acronym of Holloman Aerospace Medical Center. The chimp appeared on television and in documentary films, adding a bit of personality to a space program that had previously had fairly grim results. Ham was suddenly a hero.

There’s not much of an epilogue to Curious George’s trip in a rocket, but other stories have revisited the idea of the curious monkey going to space, including resupplying some incarnation of the International Space Station. In the biggest divergence from the Curious George books, Ham’s career was basically over once he landed. The chimp lived at the National Zoological Park in Washington, D.C. where he was noted for seeming reserved and lonely in his retirement. Melanie Bond, a trainer at the zoo, found that the chimp seemed to reluctantly enjoy affectionate interactions, like tickling his feet. Later on, she learned that this was likely due to his training for the Project Mercury, wherein his feet were given electric shocks as a form of negative reinforcement for unwanted behaviors (something the Man with the Yellow Hat has obviously never considered). This need for control highlights an element of Ham’s experience that’s perhaps a bit too dark for a children’s book-— Ham wasn’t exactly a volunteer in his mission, and films of his flight suggest that it was a survivable but frightening experience for the chimp.

In 1980, Ham was transferred to the North Carolina Zoological Park in Asheboro where he could live with other chimps with a bit more autonomy. He was only able to enjoy this final adventure for a few years though, dying in 1983 at the relatively young age of 25 years old. Instead of being fully taxidermied and displayed in a museum, Ham’s bones are currently preserved in a drawer at the US National Museum of Health and Medicine. It’s not exactly a grand tribute, but perhaps H.A. and Margaret Rey’s unintentionally prognosticative kids’ book is doing a better job of keeping Ham’s accomplishments in our memory today.