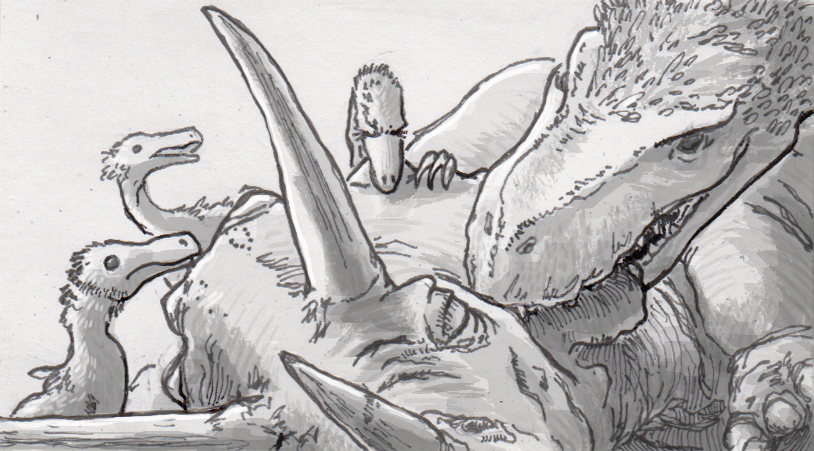 Few animals would likely enjoy watching a Tyrannosaurus rex eat its dinner, but from the safe distance of 65 million years, it’s easy to find the giant predators’ table manners fascinating. Many studies have investigated the potential strength and speed of a T. rex based on its own skeleton, but to study what effect they had on their prey, you need to look at the damage they caused to other animals. Biting into prey isn’t a one-way street though, and so researchers have also been investigating the damage to carnivorous dinosaurs’ teeth to figure out how they handled meal time.

Tucking in to a Triceratops

Naturally, the best record of T. rex snacking habits is in Triceratops. Looking through specimens found in Montana’s Hell Creek Formation, researchers found 18 examples of damage from Tyrannosaurus predation. In each case, the damage to the Triceratops‘ bone showed no signs of healing, indicating that the animal was dead or rapidly dying when the bone was damaged. Many of the wounds were puncture and pull marks, similar to what was found in the prey of other theropods. However, Tyrannosaurs‘ strong, thick teeth let them do a fair amount of manipulation with their prey, particularly around Triceratops‘ frill. Despite being mostly bone and keratin with little meat to munch on, Triceratops frills often had puncture marks in them. When coupled with bite marks on the dinosaurs’ ball-and-socket neck joint, researchers realized that T. rex was probably biting these bones to remove the Triceratops‘ head entirely. This would have exposed a lot of nutritious muscle tissue, although apparently the predators made a point of nibbling on their prey’s face as well, as indicated by precise, delicate bite marks other parts of the skulls.

While T. rex was a large predator, it was no small feat to remove one of the largest heads in history. Smaller, younger tyrannosaurs not only lacked the brute strength to manipulate a five-foot skull, they lacked the right teeth as well. Until they matured, younger predators’ size and tooth shape would have greatly influenced how and what they could safely bite without running into trouble. This is indirectly demonstrated in a separate study of a variety of theropods, from smaller Troodons to bigger allosaurs.

Biting without breaking their teeth

Instead of focusing on damage found in the bones of prey, this study looked at the microwear in each predator’s teeth. Combined with a modeling approach called finite elements analysis, paleontologists were able to model how each species would have most likely interacted, or chomped, on its prey. A common thread became apparent across various theropods, which was that they would start a bite with a vertical puncture into their prey, then pull their head backwards, essentially dragging their teeth through their target. However, the target in question likely varied according to each species of predator, as some teeth seemed much more durable than others.

On one end of this spectrum, large theropods like Gorgosaurus could safely bite into just about everything you would imagine a 30-foot-long predator eating. The wear and tear on their teeth indicated that they were likely biting larger targets with tougher skin. Conversely, Troodon teeth probably couldn’t handle much strain without risking damage. To compensate for their more delicate denticles, they were probably trying to eat softer, smaller fare, possibly even targeting invertebrates to avoid biting too roughly into bone. While no dinosaur wanted to break a tooth, these specialized bites were probably helpful to these predators— to avoid hurting themselves, they’d like go after different types of prey, avoiding the need to compete directly for the same source of food. Even if their initial bites followed the same pattern, having reason to aim those bites at different targets would have allowed more of these predatory dinosaurs to coexist in the same ecosystem.

Source: How to eat a Triceratops by Matt Kaplan, Nature