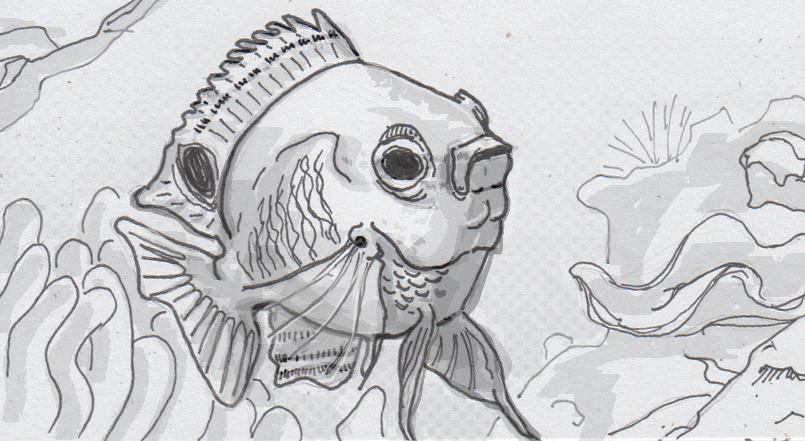 Lots of love songs touch on feelings of romance and devotion, to the point that the specific lyrics of any single tune might get blurred in your memory. Everyone from Avril Lavigne to Barney the purple dinosaur have used the phrase “I love you,” which probably makes it hard to stand out when writing new songs. Damselfish also rely on song to get noticed, albeit with a more limited range of instruments, such as their clicking teeth or full air sacs. There’s just as much concern with getting a special someone’s attention though, which is likely the reason why some damselfish seem to have recently invented a new tune for themselves.

Damselfish are territorial fish that live around coral reefs in the Pacific ocean. In some species, this territoriality can extend to both foraging and reproductive rights, with females only venturing out of their own stomping grounds to lay eggs in a male’s territory. While size can help a male impress potential mates, damselfish will also engage in a variety of displays to demonstrate their fitness, including swimming downwards through a water column while making popping noises with their air sacs. This behavior, called “signal jumping,” allows the males to show their strength and health, and is usually backed up with a bit of visual posturing to compliment the act.

The latest in fish lyrics

However, there can be a lot of distractions around a reef, and so some male damselfish seem to have devised a new way to get females’ attention. After over a decade of research, Eric Parmentier found that Pomacentrus amboinensis damselfish were somehow making a whole new vocalization that is much more tonal than their usual pops and chirps. The sounds don’t clearly correlate to the more percussive sounds of teeth or air sac pops, raising questions about how the fish are even making these sounds since the 645 Hz frequency of the new love song is just too rapid to be made by muscle contractions alone.

Beyond the mechanics of these sounds, there’s also questions about how they developed. They clearly help the fish stand out and be identified as viable damselfish among the other noises of the reef, but scientists aren’t sure how word got around that the tonal shifts were the new hot tune to listen for.

My second grader asked: Could they be teaching it to their children? Like dolphins or birds?

While we believe that whales and dolphins do teach their children specific behaviors, like songs, it doesn’t look like any fish have been proven to participate in that level of parenting. However, damselfish dads do often stick around to guard eggs until they hatch, so maybe there’s a chance they’re singing to their kids like some male songbirds do?

Source: This fish has a love song and it sounds like a windshield wiper by Greta Keenan, New Scientist