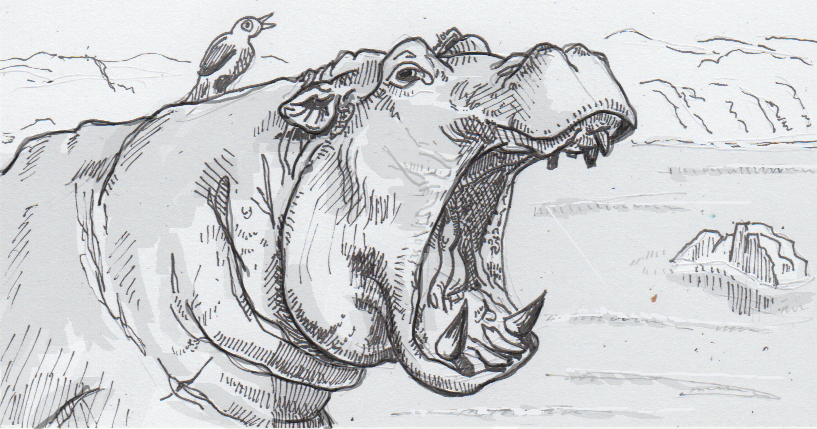 We love dangerous animals. Sharks, bears and lions are often thought of in a sort of awestruck, if nervous, excitement for their potential power over other creatures. We certainly have a few blind spots though, possibly due to an instinctual concern for sharp incisors, which have led most people to overlook one of the world’s most dangerous beasts, the hippopotamus (Hippopotamus amphibius). As semi-aquatic, 3,000 lb animals growing up to 17 feet long, hippos are capable of, and routinely do, kill more humans per year than sharks or rattlesnakes. It might all come down to how well they disguise themselves as the jolly fat man of the jungle.

The barrel shape of a hippo is the first thing that throws off our perception of these animals as dangerous. Their bulky bodies over stubby legs look almost comical, leaving many unfortunate victims to be surprised when the hippo charges at up to 19 miles per hour. While they do spend a lot of time in the water, they’re not exactly adept swimmers, as those stumpy feet don’t work as well in the water as they do on land. As a result, hippos generally lounge in the shallows or run along the bottom of African rivers, holding their breath for up to five minutes. All this terrestrial locomotion helps them with their foraging though, as they can easily walk a mile at a time looking for food.

The confusing anatomy continues with a hippo’s head. The huge mouth lacks the usual teeth found in the front of herbivores’ mouths to let them clip pieces of plants to eat. Instead, the massive mouths are fed thanks to the animal’s dexterous lips, which can pluck greens to eat. The oversized incisors in a hippo’s mouth obviously aren’t too great for grinding up foliage, and are instead used as weapons against other hippos or challengers. This becomes clear when you realize that a hippo holding its mouth wide open isn’t yawning as any people think, but is instead brandishing its defenses, giving a warning to potential challengers in the animal’s territory. The hulking mammals vocalize warnings too, but as with many of their attributes, these are also found to be comical by unsuspecting humans, as they sound a bit like laughter.

Hippos have been known to put those awkward mouths to work. They’ve been observed eating everything from impalas to wildebeests, possibly even predating on these creatures. In one case, a hippo was seen cannibalizing another hippo, although it wasn’t known if that was a case of predation or scavenging. At any rate, all this carnivorous behavior is still a bit confusing, as hippo digestion isn’t well suited to meat, and so there’s a chance they’re only expanding their diet to meet some specific deficiency in their diet.

None of this is meant to suggest that hippos start being villainized in movies any time soon. Like all animals, they have specific niches in the ecosystem, and we need to learn to understand and respect them, even if they don’t match up to the expectations of our first impression of chubby, seemingly lethargic animals. Like many kinds of megafauna, they help their local environment’s plant populations by aerating the soil both on land and riverbeds. Their somewhat disgusting habit of “spraying” their poop helps distribute seeds and manure. Farmers have started working with the creatures, switching from tempting crops like root vegetables to citrus groves, where the hippos won’t disturb the trees but will act as security patrols as they meander through orange groves at night. Finally, there’s even hope that we might some day craft a new form of sunscreen based on hippo’s own, mucus-based sun protection. In addition to offering UV protection on bare skin, it also offers some anti-microbial benefits.

Source: Why you should beware a laughing or yawning hippo by Lesley Evans Ogden, BBC Earth