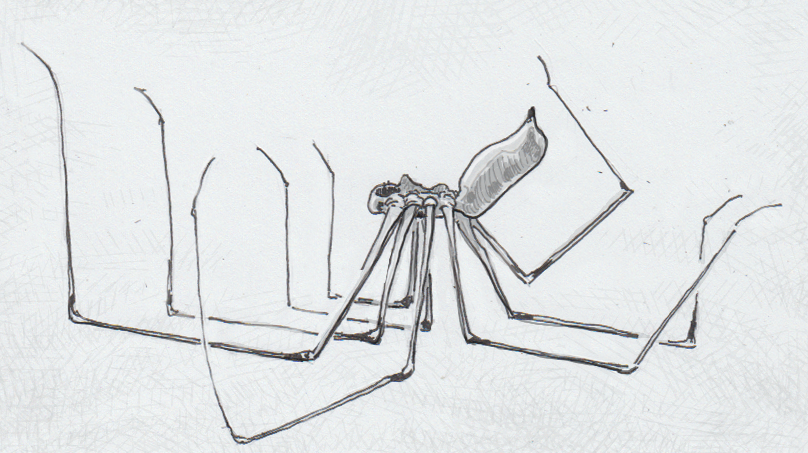 “Daddy! There’s a spider in our room!”

My first-grader called out with a mix of excitement and fear, not sure how friendly this unexpected guest was going to be. It turned out to be a daddy longlegs spider (Pholcus phalangioides,) dangling up in the corner of the room over a heap of stuffed animals. My wife and I were both rather dismissive of the tiny arachnid, but my first-grader wasn’t so sure— was that it? We were fine with leaving it there? While I don’t think she’s been exposed to too many rumors about these spiders, there’s a fair amount of confusion surrounding daddy longlegs, including about their status as spiders and how potentially dangerous they might be to humans.

Many claims on the name

The name daddy longlegs is, unfortunately, shared by two groups of arachnids (and a fly)(and a plant!) While P. phalangioides is indeed a spider, the other animals to bear this nickname are harvestmen, or more specifically, opilionids. Like the spider many of us are more familiar with, harvestmen walk on eight longlegs, although they’re as distantly related to spiders as scorpions or mites are. They’re often omnivorous scavengers, and don’t make webs or venom to subdue their meals. If threatened, some species can detach a limb that will keep wiggling as a distraction, or they’ll just bob their whole body around to be confusing. When that fails, they can try to scare predators away with secretions from defensive scent glands.

A daddy longlegs spider doesn’t seem quite as exotic in comparison. The gray to brown spiders wait in their webs, usually in protected spaces. In the wild, this may mean a cave or hollow log, but humans encounter them along alcoves, ceilings or cellars (frequently enough to earn them ‘cellar spider’ as yet another nickname.) They do have appropriately longlegs, but usually use them hanging from what is often a jumbled-looking web that sometimes looks like a horizontally-suspended sheet of silk. They have fangs that are long enough to penetrate human skin, but they they since they capture prey in their webs, they don’t have especially strong musculature in their mouths, limiting any potential threat to a human being.

Despite this rather mundane description, P. phalangioides are somehow subject to a rumor that their venom is some of the most deadly on Earth, and that the only thing protecting cellar-going humans is the spiders’ tiny fangs. While such a story must lead to wide-eyed amazement on the school playground, there’s basically no evidence to support it. Aside from the aforementioned doubts on the capabilities of daddy long leg fangs, there seems to be nothing extraordinary about their venom. No cases of human injury have been reported from these spiders, which is odd considering how often we can encounter them in our homes.

The legend may then have arisen from the fact that cellar spiders can capture and eat other spiders, including celebrity species like black widows (Latrodctus) and wolf spiders (Lycosidae). However, this doesn’t mean that their venom is anything special, since neither species would have any special protection from venom. In fact, the most interesting prey for a daddy longlegs is other daddy longlegs. While they sometimes cluster together, if food becomes scarce they may actually cannibalize each other. Even then, the venom has been measured as being fairly weak even to insects, with a forced encounter with a human producing a brief, mild stinging sensation at worst.