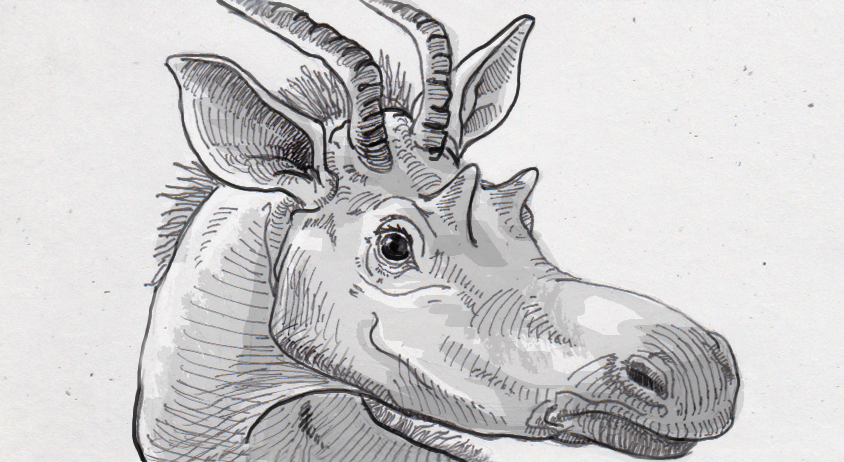 Giraffes have neat spots, purple prehensile tongues, and legs so long they can’t drink water from the ground without crouching. Of course, there’s one more piece of anatomy that eclipses all else. A feature that really defines what it means to be a giraffid. Ok, the long necks are neat too, but for members of the Giraffidae family, it turns out that what really counts are ossicones— the skin-covered bumps that look like underdeveloped antlers on the animal’s forehead. It’s understandable if those protrusions aren’t your go-to reference point for these enormous mammals, as the only other living member of the family, the okapi, doesn’t seem like its closely related to its taller kin. However, recently described fossils of some ancient giraffids have helped fill in gaps in these creatures’ evolution, making it clear that those seemingly insignificant ossicones really are the feature that ties the family together.

The ancestor in question is Decennatherium rex, a giraffid that lived in the Miocene epoch, around nine million years ago. They could grow to be around nine feet tall, weighing as much as two tons. This leaves them as a medium-sized family member compared to it’s extant, or surviving, family members, but D. rex did have at least one claim to fame. The recent fossils included unusually well-preserved skulls, letting researchers get a good look at the animal’s four ossicones. One pair grew over the eyes, and the second pair grew up to 16-inches-long between the animal’s ears. The larger set were curved and adorned with ridges, drastically punctuating D. rex‘s profile.

Forks in the giraffid family tree

The detail visible in these fossils has paleontologists carefully examining where D. rex fit in the Giraffidea family. Out of the 30 or so species identified through fossils, two major groups stand out. These are sivatheres, which includes animals that generally had larger ossicones sometimes resembling antlers, and samotheres, which had more modest protrusions on their heads, like modern giraffes and okapi. Researchers now believe that the four ossicones on D. rex straddle the line between both groups, making this species the last shared ancestor between them. If this is correct, these fossils from Spain show that these lineages lived further north and millions of years earlier than previously understood.

That’s a lot to get out of some bony lumps on these creatures’ heads, but D. rex‘s four ossicones challenged one more assumption. Paleontologists believe that they have both male and female specimens, and that both sexes sported ossicones on their heads. This contradicts an earlier hypothesis about the function of ossicones, which suggested that they may have been used for sexual display, much like the large antlers found on modern deer. However, if both sexes had use of this anatomy, they may have served some other purpose as well.

My four-year-old asked: Why are they called okapi?

The name okapi comes from pygmies living in the Congolese rainforest. In Lese Karo, they called the animal o’api, which itself is a combination of oka, meaning “to cut” and kpi, which refers to stripes they would scorch onto the shafts of their arrows. Altogether, okapi are named after the resemblance their butts have to these marked arrows, which they actually use as camouflage in the dense jungles. Early descriptions of okapi often referred to their horse-like traits, making it a surprise when they turned up with the split hooves of an ungulate, not to mention, of course, the ossicones of a giraffid.