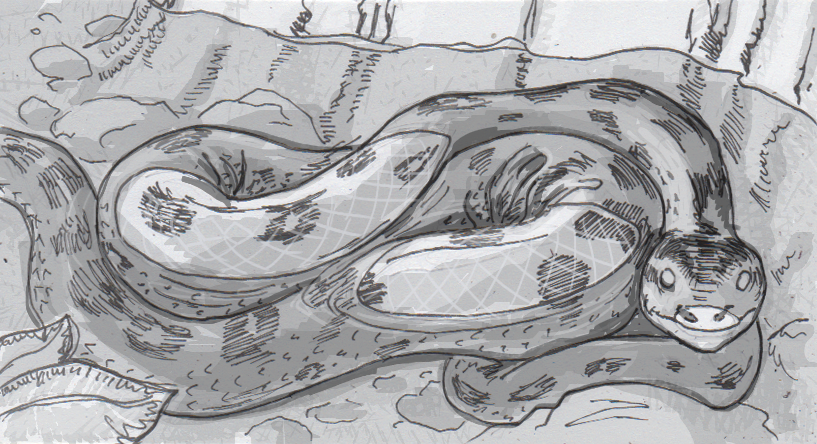 Deciphering the fluctuating differences between pythons and boas

The snake behind the glass was green-brown, with a subtle bit of patterning down its back. It was loosely folded back and forth over itself, with its snout and pale eyes looking out of the enclosure at me and my children. We just looked for a moment before the questions started— “How big is it? Bigger than you?!” “What’s it eat?” and of course, “What kind of snake is it?” As I started to answer, I realized that identifying it beyond being some kind of constrictor was the best I could do without finding a placard. What was this massive thing?

My assumptions about the animal’s hunting style was mainly based on its size. Boa constrictors and pythons aren’t always huge, but the larger species of each  family are the biggest and longest snakes on Earth. They’re all non-venomous, relying instead ambushing prey, then slowly, rhythmically crushing it before eating it whole. Beyond their dining habits, it turns out that there’s much more overlap between boas and pythons, some of which have developed repeatedly over the time. While boa constrictors and pythons last shared a common ancestor 70 million years ago, before the non-avian dinosaurs went extinct, they’ve since had at least five major incidences of convergent evolution.

Most of these adaptations have been reactions to common environments. Pythons are native to Africa and Asia, while boa constrictors live mostly in South and Central America, the various species of snake have been found to evolve patterning and camouflage that mirrors their cousins’ adaptation to that same locale. For example, burrowing pythons aren’t directly related to burrowing boas, but they managed to evolve extremely similar traits to fit that lifestyle. Similarly, tree pythons evolved in a way that matched tree-dwelling boas, and aquatic snakes mirrored each other as well. While there’s obviously some genetic overlap in these families, these traits show how environmental pressures can shape creatures that have otherwise diverged from each other.

The two families of snake are still distinct from each other, of course. They’re not interbreeding, and do have clear distinctions if you know what to look for. The first is that boas lack the premaxilla teeth in their upper mouth that you find in pythons. More dramatically, boas are ovoviviparous, meaning they incubate their eggs internally, then birth the live young once those eggs hatch. Pythons, on the other hand, are oviparous, laying and incubating eggs more like other reptiles. Most encounters with these snakes probably won’t include a good look at their teeth or offspring, so for particularly large species you could start to look at their build. Pythons have several species that can grow over 20 feet long, with the reticulated python (Python reticulatus) being the world’s longest snake at a record-setting 32 feet long. Boas, on the other hand, can also be long but tend to bulk up more. As such, the green anaconda (Eunectes murinus) is usually shorter in length but is the world’s most massive snake at 550 pounds. To help move this weight around, green anacondas spend most of their time in the water, relying on their buoyancy to mitigate the weight of their own body.

At this point, I think my kids and I were staring at a boa constrictor, thanks to the thicker body that was mostly submerged in an artificial pool, plus the South American rain forest theme of that particular exhibit. At the very least, I can confirm that it was bigger than me, and will happily skip finding out too much about any missing teeth in its mouth. (Ok, I can confirm it was a green anaconda from reading the placard too.)