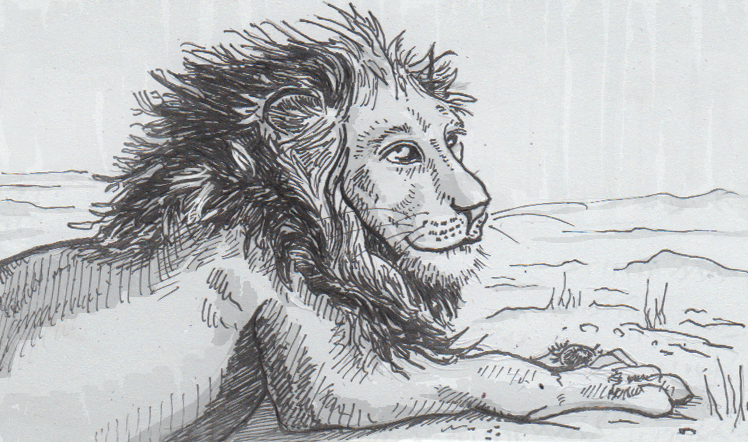 Deducing the motivations behind a mighty lion’s mane

While everyone has agreed for ages that the mane on a male African lion (Panthera leo) looked cool, it’s been surprisingly hard to explain just what made it so appealing. Of course, our opinion of these ‘regal’ frocks isn’t as important as what other lions think of them, or what they might do for the lions who have them. The fact that they’re only found on males suggests some form of sexual selection, but is that because they somehow help males compete with each other for mates? Or are they there to impress females, signaling something about what kind of father a hairy male might be? Since we can’t just ask, researchers have been hard at work to hone in on the power of the hair.

The easiest hypothesis to break down was off-handily pitched by Charles Darwin, whom was not a lion expert but still felt compelled to offer some kind of model for why a male lion would have this extra hair. He suggested that maybe it acted like armor, protecting males from the attacks of other males, which in turn would make them better able to survive encounters with threats to the pride. However, decades of observations found no advantage to extra fur guarding the chest and neck of the body, either from claws or teeth. Females seemed to be no more vulnerable to injury than males, so the focus shifted from mechanical to perceptual advantages of a good mane.

Well perceived within the pride

If perception was a component, researchers needed to distinguish key attributes of manes’ appearances. After reviewing hoards of photos, they settled on comparisons of mane length and mane color, both of which were actually variable in a lion’s lifetime. A healthier lion with more testosterone was more likely to have a darker mane, and a lion recovering from injury was more likely to have a shorter mane (due to slowed growth, not being clipped in a fight.) These concrete, physiological differences might then be something other lions would want to respond to when selecting who to challenge for dominance, or who to mate with. The question was if the lions were actually paying attention to these traits in a meaningful way.

The first experiment looked at male behavior when a potential mate was at stake. Cooperating males from a pride were lured with audio recordings of a fertile, and single, female, played from behind a bush. The males responded with interest, and gently competing with each other to see who would get to introduce themselves first, as that cat would likely be the most likely to mate as well. After many trials, males seemed to cede that first impression to the lion with the darkest mane, suggesting that they were aware of that lion’s higher testosterone and therefore probable aggression in a fight.

To complicate things, some female lions also have a say in mating pairings, and so their mane preferences needed to be tested as well. Many prides have more females than males, and so while males may pick their first mating partner, “overlooked” females get more autonomy in selecting their partners. Looking through decades of data on family trees and photos of manes, the trend appeared that once again, dark manes were the deciding factor for what constituted an attractive suitor. Mane length, once again, didn’t seem to matter much.

What to look for in a trespasser

The last big wrinkle in all this concerned lions from outside the pride. Groups of males that come into a lion’s territory pose an extreme threat to cubs if they can assert their dominance.  These sorts of encounters usually happened in the cover of darkness, and there wasn’t a body of data to draw upon as with mating preferences. While staging actual skirmishes obviously wasn’t doable, the researchers instead opted to have some real lions meet some fake ones, at least to see what first impressions of the interlopers’ manes would be. Four, life-sized stuffed animals were created and deployed in pairs. Each time, they were sorted either with matching length but different coloration, or matching coloration and different lengths to their manes. This way, lions could demonstrate which feature caught their attention by engaging with one stuffed intruder or the other.

This proved to be the one time size mattered, and it mattered to males. Female pride-members stuck to their interest in mane color, with darker manes being of more interest (at least until they were close enough to smell the stuffed animals and realize they were bogus.) Males paid heed to coloration as well, but finally also showed a preference for shorter manes when possible. It follows that when sizing up a potential combatant, defending males might choose to focus on the one that might still be recovering from an injury, either because he was a lesser fighter, or because his injury left him exposed. When these rivals turned out to be stuffed though, all lions lost interest, and even remembered the hoax years later when participating in another test with other compatriots.

The flaw in looking fetchingly fluffy

So if a nice, dark mane is so good at impressing males and females, why do any male lions still sport blond, patchy hairdos? The downside to looking like an impressively fierce feline turns out to be heat— not only does the dark color hold heat, but the darker hairs themselves are thicker, which further adds to the insulating properties of a dark mane. The result is that dark maned males have to endure baking in the African sun, which sometimes becomes so extreme they cut back on their own food intake, something a lesser specimen might not want to risk. This drawback helps explain why lion populations in cooler locations tend to have more dark-maned males, but in the hotter Serengeti, only the studliest males are willing to get so hot in order to look so hot.

My first grader said: We learned in class that only female lions do the hunting.

This is mostly true. Female lions are faster and more agile than males, and while they do contribute the lion’s share (sorry!) of food to the pride, males do take on some hunting as well. Rather than target fast prey like zebras though, male lions will go out after Cape buffalo (Syncerus caffer), which are slower and larger, making them a better match for the slower and stronger male lions. It’s unknown if the buffalo show any preferences about mane color or length though.