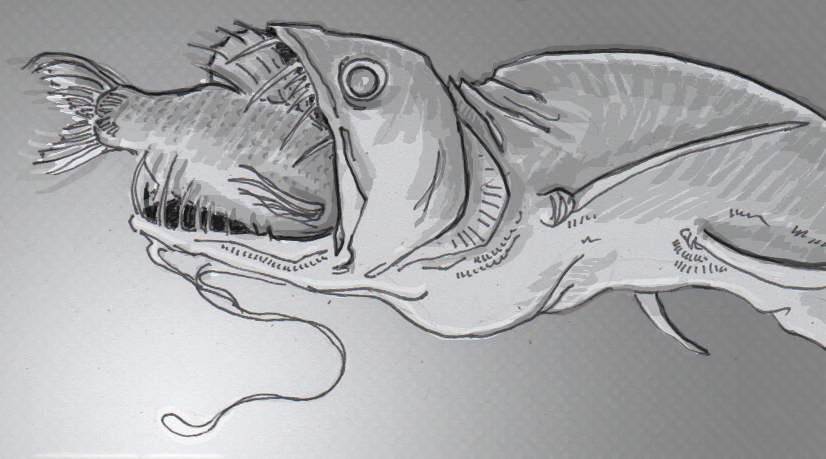 Barbled dragonfish are highly specialized predators living in the oceans’ twilight zone. Taking advantage of the lack of sunlight 3,300 feet below the surface, these fish hunt by attracting prey to the red or blue light produced by the bioluminescent tissues in the barbels that grow off their chins. Once a potential meal is in range, the barbled dragonfish can quickly strike, swallowing prey whole, even if that prey is nearly the size of the dragonfish’s own head. They can do this thanks to a record-setting mouth that can open up to 120 degrees, wider than any other fish.

A number of predators around the world can really open wide when they need to, such as snakes or crocodiles, but those creatures have a key anatomical differences from any predatory fish. Fish don’t have necks, and the fact that their backbones run right into the back of their skulls limits their mobility, which in turn limits their mouth openings to the range of motion of the jaws alone. Barbled dragonfish have apparently worked around this issue not by growing necks, but by removing vertebrae from their backs.

When studying barbled dragonfish specimens like Grammatostomias dentatus in museums, researchers noted that these deep sea predators had a notable gap between their skulls and first vertebrae. Instead, their heads were attached to their spines by a flexible, rod-shaped structure had a notochord. Notochords aren’t exclusive to fish in this family, but barbled dragonfish seem to demand more of them than usual. When the fish wants to open its mouth wide, a sheath covering the notochord stretches, allowing the fish to cock the top of its head further back and increasing the gape of its mouth. This then allows them to nearly bypass their relatively large, hooked teeth to swallow creatures almost as big as they are without the need for messy chomping and chewing.

Grown in reverse from the rear

In conducting this study, scientists found that the gap in the backbone is more than just unusual spacing between vertebrae. Some bones are actually missing, and all the backbones develop differently than most other vertebrate animals. Usually, an embryo grows their spine starting at the skull, then continuing towards the rear of the animal. Barbled dragonfish seem to have reversed this process, and grow their vertebrae from the tail forward, stopping before reaching the skull. Missing backbones then allows for a big mouth, but most likely weaker head control and less ability to chew. That’s not a problem if you’re not worried about chewing in the first place, instead focusing on swallowing up other fish, simply needing to capture them for the dragonfish’s stomach to handle breaking food down into digestible pieces.