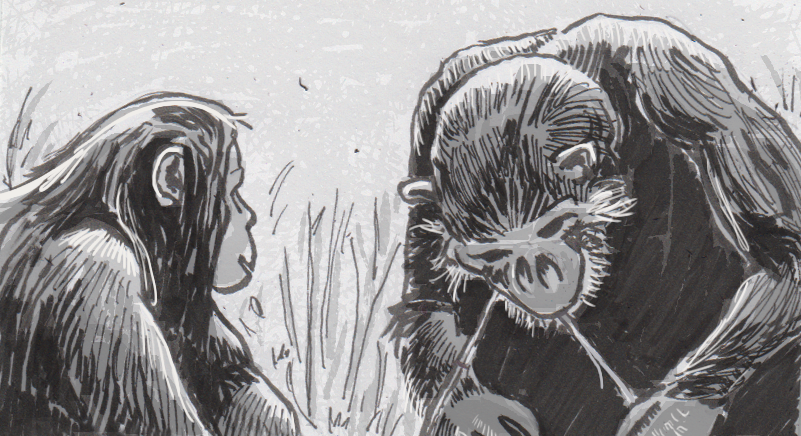 Defining, and deciphering, how chimps teach each other to use tools

Late last year, researchers reported what was felt to be the clearest evidence of chimpanzees teaching each other new skills. Camera traps in the Nouabale-Ndoki National Park caught footage of numerous chimps teaching their young how to fish for termites using sticks as probes. The mothers would first demonstrate then hand over their stick to the younger chimp who would repeat the demonstration as best they could.

It wasn’t the first time young animals would imitate the actions of their parents, but there were some important details about intent that made these lessons stand out. The mothers explicitly handed over their high-quality termite probe, even though it meant less food for themselves. Their pupils were then measurably more successful after the lesson, showing the demonstration was successful. These details are significant, and help define when a chimp is teaching, and when it’s… well, doing odd things with grass?

In Zambia, a mother chimpanzee took her daughter for a very different kind of lesson. The mother, Noel, had found the recently-deceased body of Thomas, a chimp she had known in life. Most chimps in the group had been lured away from Thomas’ body with tasty snacks, but Noel and her daughter, Nina, stayed put. With her daughter’s full attention, Noel then proceeded to dote on Thomas’ body in a way never before seen by researchers.

As Noel approached Thomas’ head, she first picked a piece of stiff grass, held it in her mouth, then used both hands to open the dead chimp’s mouth. She then used her thumbs to poke at his teeth for a moment before switching to her recently selected stalk of grass to further probe around. Unlike the aforementioned termite demonstrations, Noel never looked up to make sure her daughter was following along, and instead poked along Thomas’ teeth with the grass, tasting the grass, then continuing.

The pair were eventually interrupted so that Thomas’ body could be removed to avoid spreading infection, and so the goal of this behavior was never clear. The pattern of activity seemed very deliberate though, and the close observation by Nina made it appear that Noel was either confusing her daughter, or doing something understood to be important. At the very least, it was the first time grass had been observed being used as a tooth-cleaning tool in this way on either live or dead chimps, and so researchers are looking for any signs of follow-up activity from the two living chimps.

While seemingly less weighty than Noel’s tooth-cleaning ritual, a Zambian chimpanzee named Julie has clearly been sharing her uses for grass with her peers since 2010. Julie made it a habit to stick a piece of grass in one ear, and then just leave it there while going about her day. While researchers could discern no function or benefit to Julie’s behavior, it did resonate with the other chimps around her, who one-by-one started putting grass in their ears as well.

It might not be fair to compare Julie’s ear-grass to tool use, unless you want to say that the purpose of that tool was to influence Julie’s peers. We don’t know if chimps have a sense of being “cool,” but if so Julie may have succeeded in creating a cultural trend or fad. Despite being shared and adopted with other chimps, we can’t say that Julie explicitly taught anything here. Unless the grass was uncomfortable to wear and Julie was suffering for the sake of fashion, no sacrifice was made to get the lesson across, nor did Julie hand out grass to her friends.

My four-year-old said: Maybe Noel thought she was feeding Thomas.

Probably not. Chimpanzees seem to have some understanding of death, and seem to recognize a dead peer when they find their body. Reactions are usually subdued, with chimps sitting quietly around the body, or more animated, with one chimp slapping and maybe dragging the body. At any rate, because the teeth cleaning was unusual even among living chimps, researchers are very curious about what Noel wanted to accomplish, as the repetition of actions, and not being swayed by food, implied she was very focused on the task.

Source: Tool use for corpse cleaning in chimpanzees by Edwin J. C. van Leeuwen, Katherine A. Cronin and Daniel B. M. Haun, Nature