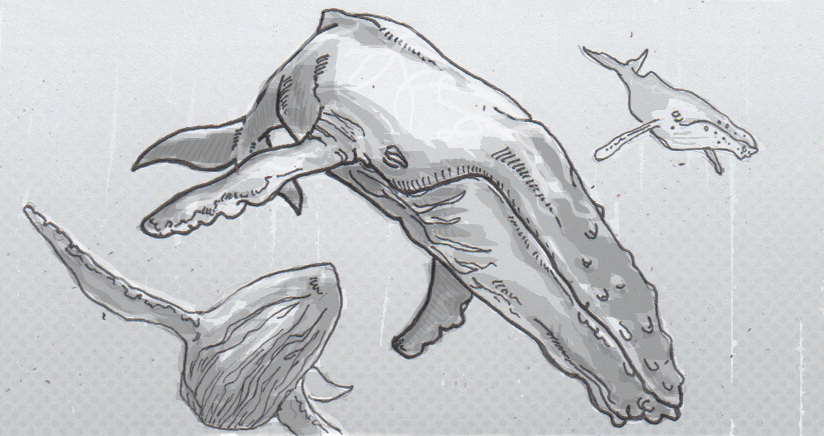 New degrees of sophistication discovered in humpback and narwhal noises

According to Star Trek IV, whale vocalizations saved the world from aliens back in 1986. According to a growing body of underwater recordings, these vocalizations allow for long-distance communication, possible cultural learning, navigation by particle motion and some of the most sophisticated echolocation on Earth. In some cases it’s not entirely clear how the whales are utilizing these abilities, but taken as a whole it appears that whales live in an ocean defined by sound.

Recent observations of humpback whales (Megaptera novaeangliae) off the coast of Hawaii revealed a form of vibration that had never been detected from a whale before. Researchers serendipitously recorded distinct particle motion created by the humpbacks songs. Sound registered by our ears is the result of pressure waves buffeting our ear drums, as waves of air or water molecules get knocked together at specific frequencies. The new vibrations recorded in this case were additional layer of complexity accompanying that audio activity— in addition to the pressure waves of the whales’ vocalizations, the water molecules themselves were distinctly vibrating in a way detectable up to 656 feet away.

We don’t normally ‘hear’ that kind of vibration, although when a sound is really loud, like rumbling bass, we can feel it. Humpbacks can likely do more than feel this buzz, as their ear bones connect to their jaw bones in a way that would let them work like giant tuning forks. At this point it hasn’t been proven that the whales are using this sensitivity for a unique function, or if it’s just another layer of sensory information to enhance their hearing.

Recordings of narwhals (Monodon monoceros) have found they’re using sound for navigation with incredible precision and control. An array of underwater ‘hydrophones’ recorded clicking vocalizations from various narwhals, and found that they not only employ echolocation like sperm whales and dolphins, but that they have very precise control over what they ‘listen’ to when navigating. For instance, they can broadcast sound across a wide area, then narrow their focus to more closely track prey at both long and short distances, like focusing a flashlight down to a laser pointer. Their clicks are also formed in a way that can be reflected off the surface of the water, or underside of the ice pack. Aside from better fidelity for their hunting clicks, this also allows the narwhals to find openings in the ice so they can surface for air.

As much as these whales seem to have control over their auditory domain, this research also points to how sensitive whales are to the sounds of the sea. Unfortunately, human activity from boats, drilling and sonar has been making the ocean an increasingly noisy place, and there is concern that we’re drowning out sounds critical to whale survival in the process. It’s just harder for us to appreciate noise pollution since it’s hidden from our daily routines, and we lack the tuning-fork jawbone to really hear it all.