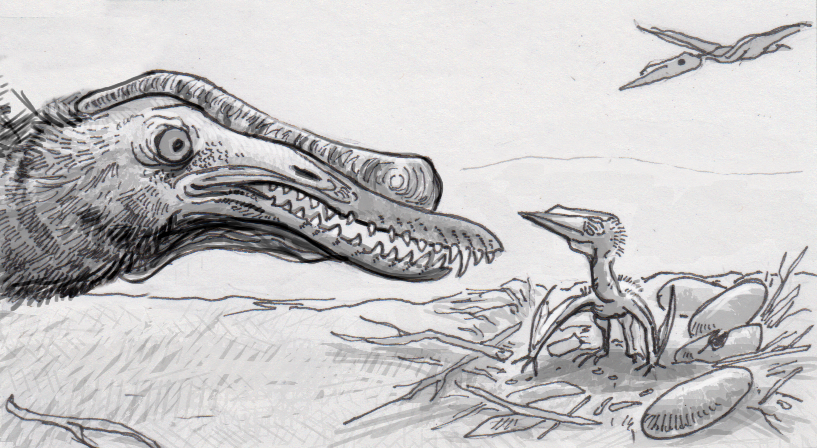 120 million years ago, disaster struck a pterosaur nursery in what is now northwest China. What was likely a huge, sudden storm washed hundreds of nesting pterosaurs out of their nests, burying them in a jumble of fine sand and silt. While it was certainly a terrible way to die, the water and silt did an amazing job of preserving huge swaths of the nesting colony’s population, from young animals to old. Most remarkably, some of the soft-shelled eggs of Hamipterus tianshanensis tore open, allowing silt to enter and envelop developing embryos, saving them from being crushed and flattened in the fossilization process.

Paleontologists have found and studied prehistoric eggs before, but finding developing pterosaurs is especially rare. Even adult pterosaurs have thin, hollow bones that make flying easier, but aren’t especially durable when buried in rock for millions of years. Embryos developing in soft, lizard-like eggs are understandably rarer, making this particular cache of fossils a unique opportunity to learn about pterosaur life cycles. A nine-cubic-foot block of sandstone is still being studied, but researchers believe it contains bones from H. tianshanensis of all ages, as well as up to 300 eggs.

Not every egg survived the rough process that swept them out of what was probably a nesting colony, similar to what some bird species use today. Out of the 215 eggs extracted, 42 retained their original dimensionality enough to scan, and 16 had developing embryos to study. To examine these delicate structures without damaging them, researchers employed computerized tomography, essentially letting them build a 3D model of the shapes still encased in sandstone.

These fossils have also sparked a somewhat controversial conclusion about these pterosaurs’ growth patterns. A particularly mature embryo was judged to be close to full term, but surprisingly didn’t have fully developed deltopectoral crest bones on its wings. In contrast, it did have some full-strength femurs, raising the possibility that these pterosaurs could only walk when they first hatched, waiting to fly until they’d had a chance to grow up a bit. This is in contrast to other studies from other species, and probably can’t be resolved until more embryos can be found. Otherwise, it’s hard to say if this single specimen represents the development of all pterosaurs, all members of its species, or even if it was as close to term as the study’s authors speculate.

With so many individuals crammed into a single block of limestone, we should have more details to how pterosaurs grow up. Many researchers agree that the diversity of ages seen in this collection is strong evidence of communal nesting. The variety of ages also suggest that nesting season was at least long enough for some babies to hatch before their neighbors were still incubating in their eggs. As much of a calamity as the original storm was for these pterosaurs long ago, their well-preserved deaths will soon give us an incredibly clear picture of a H. tianshanensis‘ life cycle.