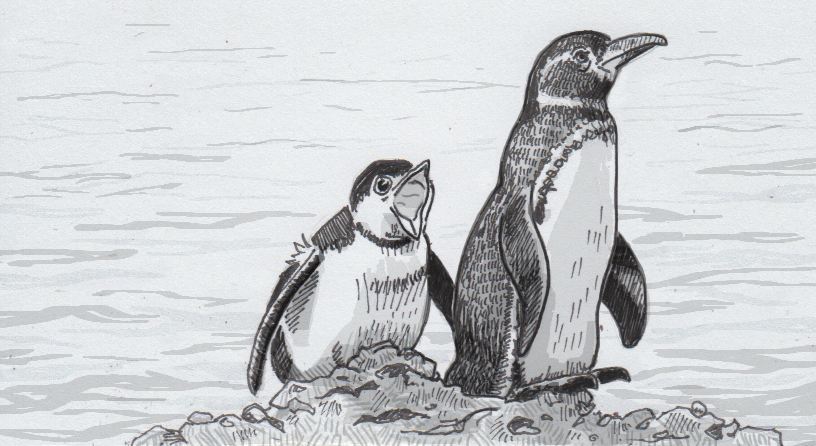 Determining when penguin parents choose to feed their fully-grown fledglings

Once an animal is mature enough to get its own food, the expectation is that they’ll do exactly that. Even at age four, my son is quite proud of himself when he can pour a cup of milk without spilling, which is great. This isn’t an absolute transition though, as I’m certainly not about to stop feeding the kid any time soon, not even once he’s an adult if he comes for a visit. Galapagos penguins apparently have a similar sliding scale for their young, having been observed feeding fledglings that were, in theory, ready to catch their own meals. For a long time scientists have tried to figure out the rules of this extended care giving, and found that the crux of this dynamic isn’t really parental, but environmental.

A fledgling is a bit like a human teenager. They’re nearly mature enough to handle themselves, often with fully developed flight feathers and wing muscles, although like a kid with a learner’s permit, still not really ready to be completely on their own. Penguins aren’t concerned with flight, of course, but as a fledgling they’re likely to have left their parents’ nest, often swimming to catch food on their own.

Some sea birds will stick with their offspring through this transition, sharing food and support while the young birds’ get a hang of hunting. Most penguin parents need to molt after raising a chick though, forcing a faster transition. From this context, the occasional begging fledglings confused researchers watching Galapagos penguins (Spheniscus mendiculus). The young were sometimes observed using specific (very whiny sounding) vocalizations towards adult birds emerging from the water, apparently begging for food. Most birds ignored these requests, but since penguins know the sound of their family members’ voices, parents couldn’t resist helping their kids out with some free snacks.

Except when that wasn’t an option. By plotting out conditions surrounding these infrequent feedings, researchers found a pattern in when they occurred. Rather than begging when they were down on their luck, the fledgling penguins were fed when food was abundant. Fish around the Galapagos Islands are available at the whim of the weather and changing currents, and so these penguins need to make the most of resources whenever possible. When there are fish to go around, it’s easy for a parent to help out its hungry offspring, giving the kid a boost without too much extra effort. When the fish aren’t around, those fledglings have hopefully been fattened up enough to survive on less.

In the end, extended care giving isn’t up to the parent birds, or any unusual dependencies of their young. The fledglings aren’t especially needy as much as asking to take advantage of the local buffet as long as it’s open.