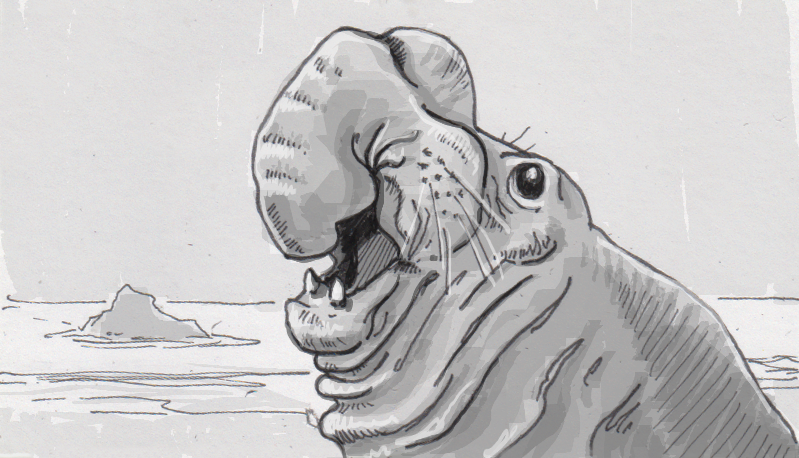 After eight years of his presidency, I’m fairly confident that I could recognize and understand just about anything Barack Obama says. Even if he were reading something unexpected, like a end user licence agreement or child’s joke book, I’d still understand who was speaking and what was being said. There are limits to this though, as changes to pitch, rhythm and word order would probably make Obama’s voice harder to identify, possibly to the point he could be understood at all. This isn’t a huge worry in my daily life, but understanding the threshold where communication breaks down is critically important, particularly for animals where vocalizations (not made by former president) influence life or death situations.

Elephant seals (Mirounga angustirostris) make a lot of racket around mating season, largely to scare off potential rivals that may be after a male’s mates. When a rival bull does challenge the dominant male, the blubbery mammals will thrash each other with their flippers and teeth, sometimes leading to fatalities. When a challenger survives such an ordeal, he also makes note of the dominant male’s particular croaking roar, and will remember who that voice is tied to if it’s heard again in the future.

To test the limits of this recognition, researchers recorded the grunts of a dominant male elephant seal, then digitally altered the pitch or rhythm of the vocalization. When unaltered vocalizations were played to subordination males, they generally ran away to avoid the expected fight. But when these same males heard an altered version, they apparently thought it belonged to someone else, and would stay put to risk a confrontation. Changes in pitch would likely be tied to the size of an animal, and so it’s less surprising that that made a difference to the listening bulls. The sensitivity to rhythm was more surprising, as most mammals don’t seem to rely on that kind of tempo variation as a cue in their interactions.

Of course, what is being vocalized is important to vocalizing animals too. Researchers listened to the alarm calls of Japanese tits (Parus minor) to see how sensitive they were to changes in their chirps. When a predator approaches, the tits will sometimes issue a “mobbing call,” inducing any member of the flock within range to swarm around the threat. These calls were found to use four phrases in an ABC-D pattern. The ABC chirps alerted listeners to danger, but the delayed D is what kicked off the counterattack.

By altering recorded calls, researchers found that this phrasing was pretty inflexible. Substituting calls from other regional tit species, like the willow tit (Poecile montanus), in for the D phrase completely botched listeners’ reactions. ABC-taa didn’t elicit any of the response that ABC-D did, giving researchers a sense of how these birds are constructing what is basically a crude form of grammar. Bending it too much essentially ruins the statement’s manicotti, er, meaning.

Both studies help us understand more about how language evolved, and how much specialization it has required of animals’ brains along the way. More immediately, it may also help inform conservation strategies, since we now know how sensitive these animals are to the sounds they hear. Mishearing a roar or call for help could have serious consequences for an animal that can’t clearly make out what it’s listening to.