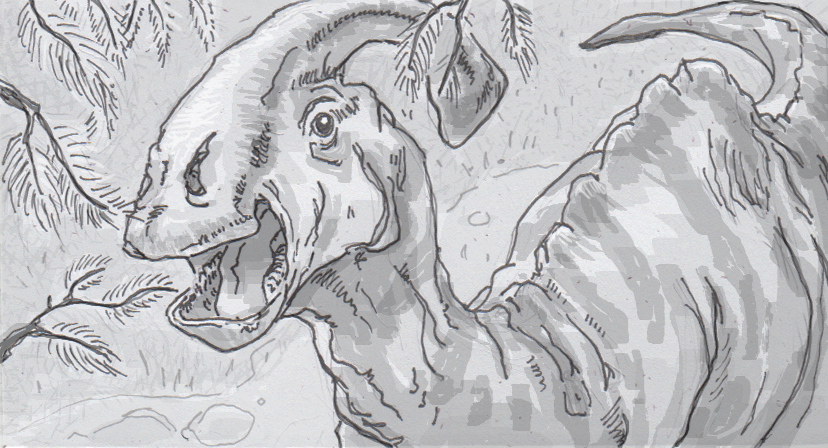 The development and effeciency of hadrosaurs’ densly-packed dentition

It’s easy to get excited about the fearsome bites of big, predatory dinosaurs, but those mouths rarely matched the degree of innovation seen in prehistoric herbivores. Most carnivores chomped and swallowed their meat, but from the Triassic to the Cretaceous period, herbivores evolved more complex feeding mechanisms, like chewing. Rather than swallow leaves hole, later herbivores like hadrosaurs evolved sophisticated jaws and teeth, allowing them to maximize the nutritional value of the leafs, twigs and branches they lived on.

Earlier relations to hadrosaurs relied on triangular or leaf-shaped teeth to slice up their greens. These teeth followed the basic structure of our teeth today, with a living, pulpy tissue at their core, covered in harder dentine, then encased in a strong enamel shell, which is the bit we try to brush clean every day. Over time, the pre-hadrosaur lineages developed more tightly packed teeth, with slightly asymmetric deposits of enamel. No tooth had to be perfect though, as dinosaurs likely lost and replaced teeth their whole lives.

By the time true hadrosaurs, like Corythosaurus or Parasaurolophus, had evolved, their teeth functioned as complex but efficient system. Teeth grew in what could be considered tightly packed batteries, with up to 1000 teeth at a time in a single mouth. Laced together by softer, peridontal ligaments, the densely arranged groups of teeth could function as massive, single molars in each part of the jaw. Those jaws would then move up and down, flexing in and out, in order to grind up food.

Within each “super molar,” individual teeth grew in stacks up to five teeth deep. The newest teeth grew deep in the jaw, with a higher amount of living pulpy tissue inside. As the tooth began to be pushed towards the surface by its eventual replacement, the amount of pulp decreased while dentine increased. This trend meant that the tooth at the top of the stack that was actually exposed to chewing was done growing, with a cap of enamel at the top.

This arrangement may seem overblown, with up to four, unused teeth underneath each tooth that’s actually chewing, but it actually allowed each tooth to be used to its fullest potential. There’s no evidence that hadrosaurs were loosing teeth in the way sharks or other predators do. Instead, the pulpless tooth that was part of the chewing surface could be used until it was ground to nothing. Aside from getting the most out of every ounce of dentine, this means that the chewing surface of the super-molar overall would be nice and consistent, with no gaps or crannies to worry about. Enamel only needed to be on the top of each tooth, because this way only the tops of the teeth were exposed to the tough foliage these dinosaurs ate.

Hadrosaurs weren’t the only herbivores to pack their teeth into dental batteries, but they certainly seemed to maximize what this arrangement could offer a twig-chomping dinosaur.

Source: How duck-billed dinosaurs evolved to have more than 1,000 teeth by Pete Buchholz, Earth Archives