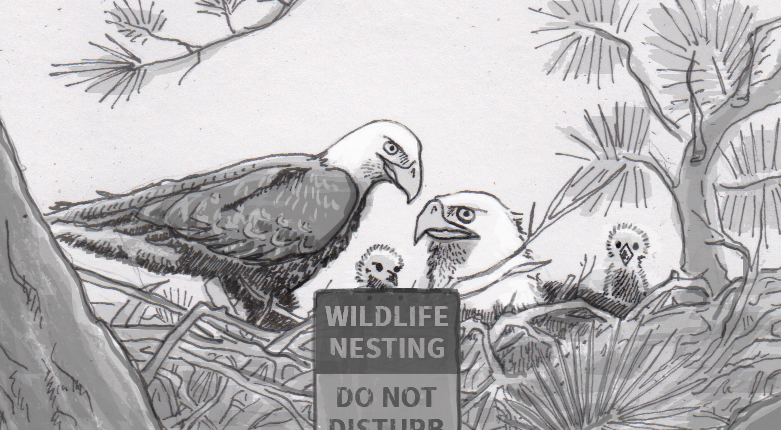 One of the jobs of many bird nests is to keep the eggs, and later chicks, safe from harm. Different species have come up with a huge range of nest designs, although none are so perfect that they couldn’t use a helping hand in certain situations. In some cases, help means keeping people away from nests, while in others it means adding light sensors and mechanization to deal with threats that birds just haven’t had time to adapt to. Granted, those threats can often be traced back to human activity, but that shouldn’t preclude people from doing what we can to help keep these endangered birds as safe as possible.

Bald eagle (Haliaeetus leucocephalus) populations in the United States have been slowly recovering since the pesticide DDT was banned in 1970, but they’re certainly not in the clear yet. Researchers have been keeping a close eye on breeding pairs, but not in a way that would be obtrusive to the birds themselves. In Minnesota national parks, this respect for the birds’ sanctity also led to the sequestering of around nine eagle nests each year. The goal was to keep people away from any nests that might be home to eggs or eaglets, under the assumption that human interference would reduce the reproductive success of the nesting birds.

The effort to keep humans away from nesting eagles seemed to be moderately successful at first. When the nests were first protected in 1991, nests, eggs and offspring were counted from aerial surveys, and found that protected nests where eight percent more likely to have at least one offspring, and 13 percent more likely to have more offspring than an unprotected nest. These counts were later realized to overlook some variables, like the frequency of egg predation in unprotected nests. Fortunately, a more thorough analysis yielded good news— protected nests were more successful, and were credited with boosting the number of breeding pairs by 37 percent.

While signs may successfully keep humans from bothering a nest, they’re not as effective at deterring egg-gobbling sugar gliders. Sugar gliders (Petaurus breviceps) are a species of possum that can glide through trees like a flying squirrel, and they have been a growing problem for endangered swift parrots (Lathamus discolor) since they were imported to Tasmania in the mid-19th century. As the parrot population plummets thanks to habitat loss, the nocturnal sugar gliders are making things worse by raiding the remaining 2,000 birds’ nests for food.

Ending deforestation or removing the invasive sugar gliders currently seems like an overwhelming task, but conservationists have made some progress at protecting the swift parrots’ eggs. The Difficult Bird Research Group has designed special nesting boxes for the endangered parrots that take advantage of the birds’ and possums’ different schedules. A light sensor built into the box closes the door at night when it gets dark, keeping the sugar gliders out, then opens the door in the morning when the parrots are ready to start their day.

The so-called “possum keeper-outers” have been working so far, although they can’t save the swift parrots on their own. To really stabilize the species, the logging and agriculture interests need to drastically change course, and stop cutting down the critical habitats the swift parrots normally nest in.