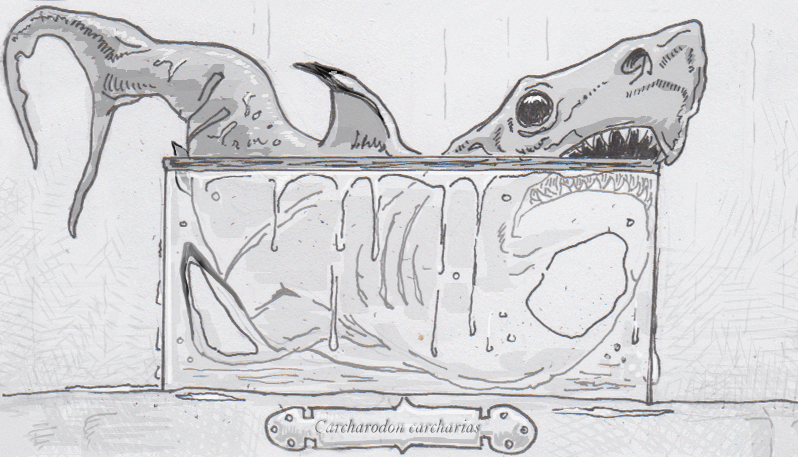 The difficult history of keeping a great white shark in captivity, without killing it

While almost everyone over age six can point to Great White Sharks! as the most fearsome, exciting predator in the ocean, most of us will never see one in person. Maybe inaccessibility adds to the species’ mystique, leaving them to swim and hunt in movies and our imaginations, but there definitely have been attempts to put white sharks on display for the public. The problem is that this proves to be a horrible situation for the sharks and any of their neighbors. In even the most thorough, careful attempts to house one of these massive fish, the sharks never live more than a few months in captivity.

Starting in the 1970s, various aquariums started making concerted efforts to capture white sharks (Carcharodon carcharias). Each time drew public interest, but only briefly since the sharks never survived more than 16 days in captivity. The sharks would usually stop feeding and even stop swimming, which would basically lead to their suffocation, since sharks have to keep moving to push oxygenated water over their gills. In 2011, the Monterey Bay Aquarium in California wanted to try again, taking every care and precaution possible to keep a white shark alive.

The first step was to construct a million-gallon tank 35 feet deep in order to give the shark as much room to move as possible. Great white sharks are swift swimmers, and can quickly travel hundreds of miles, and while the aquarium obviously couldn’t replicate the entire ocean, they did their best with the space and resources available. The tank successfully housed a few other large fish like tuna, but a full-grown shark at close to 14 feet long would still be too big. Instead, the plan was to house a juvenile shark, under a year old, since it would only be around four feet long. At that age, the aquarium would also be able to feed the animal fish, since white sharks don’t start targeting marine mammals like seals until they’re older.

Once these arrangements were made, the shark was not brought to the aquarium immediately. A pen was constructed in the ocean off the coast of southern California, where teams observed the young specimen in this semi-captive state to make sure it would accept shifts in lifestyle, like being fed by humans instead of its own hunting. Only after biologists thought this was working did they try moving the shark to the actual aquarium further north.

Things looked promising at first, but it wasn’t long before concerns were raised about the shark’s welfare. Despite regular feedings, the shark killed two of its tank-mates, which led to its release in the wild after just six months in the aquarium. In that time, it was also noted that it suffered some scrapes and possible scarring from running into the sides of the tank. It seemed like the collisions were a sign of the shark’s mental health breaking down, but they may have also been due to the swift swimmers not being able to safely maneuver in even a million-gallon tank. After the first shark’s release, other great whites were captured for shorter lengths of time, often showing similar injuries while living in the tank.

Tracking of the last released shark revealed that it died within a month of returning to wild, basically ending the aquarium’s attempts to share great white sharks with the public in this way. The sharks just don’t fit in the context of an aquarium, and it was proving to be too costly in a number of ways to keep trying to make these round pegs happy in the aquarium’s square hole. The deep-water tank lives on though, presumably with a bit less tension now that the speedy, frustrated, celebrity predators are no longer sharing the water.

My second grader asked: But they have a hammerhead shark in that tank. Why is it ok there?

Many aquariums have found ways to house shallow-water sharks, like nurse sharks, but pelagic sharks, those that traverse the open seas, are another story. Hammerheads, like great whites, are pelagic sharks, so the difference might not be expectations of space, versus the way these particular fish move in that space. Great white sharks are speedy cruisers, but hammerheads are noted for maneuverability, which may make it easier for them to deal with the confines of their tank.

Source: Why there aren't any great white sharks in captivity by Joss Fong and Dion Lee, Vox