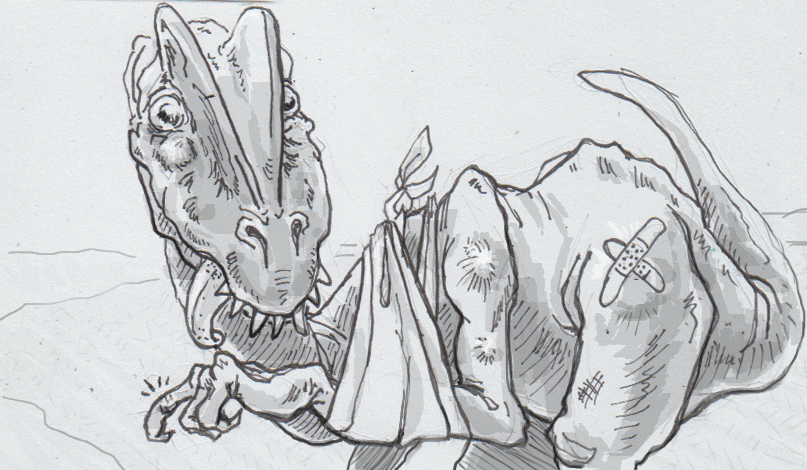 True form fossils tell us the shape of an animal’s skeleton. Trace fossils tell us a bit about the shape, but more about an event that left an impression on the environment, like a footprint. The combination tells us about when an animal had a very rough day, leaving marks of an event in its skeleton. Obviously no creature wants a broken bone, but as humans in the age of casts, splints and surgery, it’s hard to appreciate how dangerous a broken bone can be to an animal. In the case of one very tough Dilophosaurus, it’s almost hard to imagine how the creature managed at least seven brakes in both its arms while living to tell the tale.

This particular specimen of Dilophosaurus wetherilli had been discovered years ago, but recently got a thorough reexamination for signs of trauma. It’s hard to say exactly how often such injuries are recorded in bones, as paleontologists often ignore them for their anecdotal nature, instead focusing on the forms and possible ecology that were common to the whole species. Discovering a small fracture in a fossil is also hard to properly diagnose, since they must be carefully compared to bird or reptile fractures (vs. mammals) to really be sure that the damage occurred when the animal was still alive, instead of after the bones were buried. However, finding signs that a bone was healing shows that the animal lived beyond the injury, at least long enough to infuse the fracture with some evidence of knitting bone tissue.

Of course, a not every victim of a broken bone is lucky enough to fully heal. In the case of our unlucky D. wetherilli, among the various fractures that looked to be healing properly was at least one location with evidence of an infection, plus signs of a nutrition problem. The right humerus showed uneven twisting and wear, suggesting the theropod was suffering from an osteodysplasia— a condition found in nutritionally deficient birds today that are healing from an injury. The dinosaur likely carried itself unevenly to compensate for the pain, possibly exposing its right arm to more chances for injury.

Somehow this animal lived through this, at least for a few weeks minimum. Dating the amount of healing in such injuries is difficult, partly because reference data is hard to turn up even in living species. Since a loss of mobility or strength can easily render an animal helpless, many animals simply don’t endure for long with a serious break in their leg, foot or back. One tip for surviving such an ordeal may be to be young, and be social. Studies looking at extant primate skeletons found that adults with breaks in large bones often die, but injuries as juveniles seem to be much less serious. This may be due to the higher rate of growth in bone tissue of young animals, as well as the higher chance to be living with a social support structure to help nurse the patient back to health.

Finally, to wrap up the story of our ill-fated D. wetherilli, we need some kind of model for the specific event that created these painful trace fossils. Since there were some features that could have resulted from puncture wounds, there’s a chance that these injuries are the result of an encounter with another dinosaur that was either attacking or defending itself. The various fractures could be from a series of impacts, or one bad crash into trees or rocks. I’m sure it felt so lucky to have survived it.

Source: What a pain in the…arms! A record-breaking number of injuries in a theropod dinosaur by Sarah Gibson, PLOS Paleo