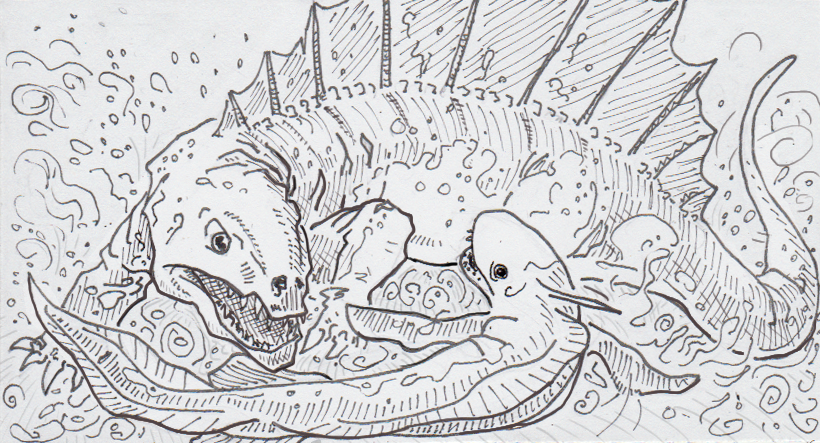 Dimetrodon’s dangerous diet was happy to bite back

If you’re a 500 pound apex predator with a mouth full of formidable, serrated teeth, what do you eat? In the case of Dimetrodon 290 million years ago, it looks like you munched on just about anything you could find. For years, paleontologists have suspected that the terrestrial ecosystem of the Permian period might not have had enough large prey for a large predator like Dimetrodon. To make up for a lack of traditional foodstuffs like large herbivores, fossil beds indicated that the sail-backed synapsids filled those gaps with seafood and cannibalism.

Dimetrodons lived along swampy shores, long before dinosaurs, mammals or even flowering plants. Their world was instead dominated by their fellow amphibians and reptiles, such as Diadectes and Acheloma. Growing to sizes up to 15 feet long, Dimetrodons stood out not only for the large sail on their back, but also for the array of tooth-types in its mouth. More than one lineage of Dimetrodons evolved serrated teeth, which helped shear through meat while other, larger teeth immobilized prey, an innovation for their time period.

So who was on the receiving end of all this chomping? A few bulky herbivores seem to have made their way onto the menu, but there’s much more evidence that points to sharks. Over 60 Xenacanthus shark fossils have been found among Dimetrodon teeth, which is a strikingly high number considering that cartilaginous fish are rarely fossilized beyond their teeth. If the sharks weren’t available, it looks like Dimetrodons weren’t too discriminating— their tooth marks have been found in bones from other lizards, amphibians and even their fellow Dimetrodons.

Fighting with your food

This isn’t to say that Dimetrodons completely dominated their world.  Xenacanthus coprolites show that they were digesting their fair share of Dimetrodons as well. They were generally smaller than the large synapsids though, so it not have been a fair fight, but bite marks on Dimetrodons indicated there was a fair amount of risk for both animals. It all adds up to a wild, dangerous shoreline, where you never knew exactly who would be coming home with dinner that night.