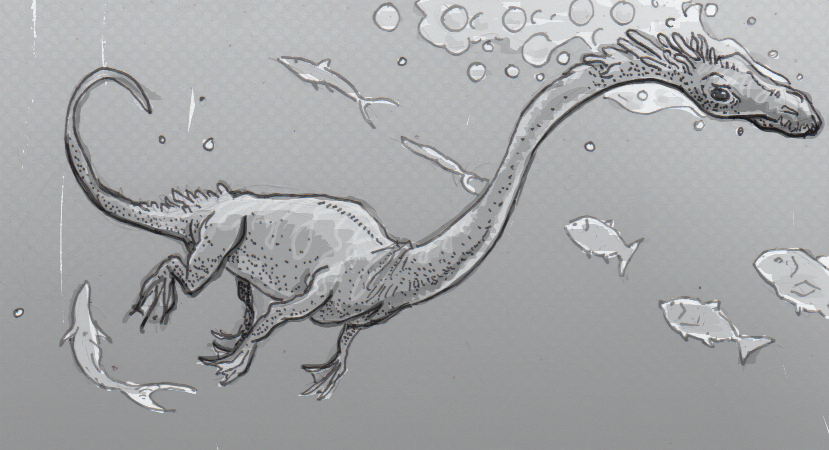 An apparently pregnant marine reptile from 245 million years ago is making scientists reconsider the evolution of live birth. Other specimens of Dinocephalosaurus have been found before, but they were found as single animals, perpetuating the assumption that like most reptiles today, they reproduced by laying eggs. The Dinocephalosaurus embryo adds to a growing collection of evidence that reptiles have a dynamic relationship, rather than a fixed dependency, with egg laying.

Dinocephalosaurus was a four-limbed, long-necked marine reptile living near what is now China. It’s thought that it used its long neck to quickly position its head to surprise and capture fish. Importantly, that was usually a brief face-to-face encounter, meaning fish were being snatched up head first. When fossilized stomach contents have been found in the bellies of these reptiles, the fish remained oriented in the same direction, moving through Dinocephalosaurus’ gut without being flipped around.

Normally there’s not so much concern over which way digested stomach contents are facing, but in this case it provided a clue about the second skeleton found in this fossil. Unlike the small fish aligned to the mother’s stomach, the embryo was flipped the other way, and curled into the fetal position commonly adopted by developing vertebrate animals. These two clues indicate that the smaller Dinocephalosaurus was not a case of cannibalism, but rather a young animal growing in its mother’s womb.

Egg laying animals do carry their eggs internally for a time, but this embryo was far more developed than unlaid-babies usually are. With body developed enough to see posture, this baby reptile would usually be closer to hatching than still waiting for its egg to be deposited in the sand somewhere. No sign of egg shells was found with the fossil, all of which suggests that eggs were not part of this species’ birth plan.

Not terribly rare among reptiles

While Dinocephalosaurus is the earliest example of a reptile giving live birth by 50 million years, it’s certainly not the only reptile to do so. Other ancient marine reptiles have apparently skipped laying eggs, and as many as 20 percent of living reptiles skip laying eggs when reproducing. It seems that instead of a rigid, one-way evolutionary shift, live birth may be a relatively responsive adaptation to environmental pressures.

Exemplifying the concept of flexibility in reproductive strategies, yellow-bellied three-toed skinks (Saiphos equalis) in Australia have recently been observed laying eggs and giving live birth. The key factor seems to be the local conditions of each mother. The lizards living in warm weather continue to lay eggs, while individuals living in higher altitudes with colder weather carry their young until birth. While this may be more taxing on the mothers, the benefit is that the eggs are more protected from the cold, and thus more likely to survive their incubation period.